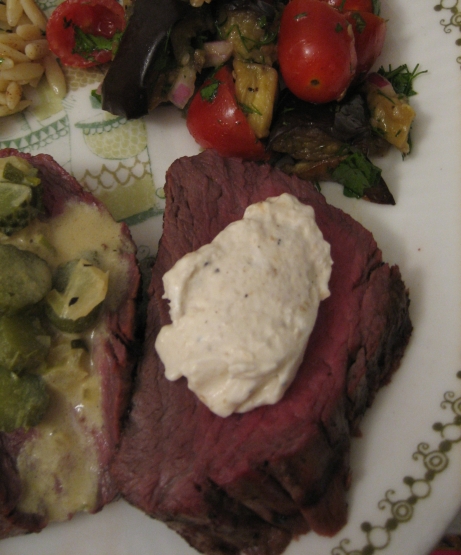 Unfortunately there’s no recipe online for this one.

The recipe calls for 3-4 tablespoons of horseradish, to one cup of cream, then suggests that you taste and adjust at the end. It calls for grating your own root if you can find one, or gives the jarred stuff and an acceptable alternative. I had a jar in the fridge so I went with it. I had just enough left for the recipe, and didn’t think to pick up a new jar. I didn’t account for the fact that horseradish loses its pungency quickly once it’s been opened, so mine was a little anemic. I could have used twice as much of my post-haircut-Samson horseradish and not risked burning anyone’s nose. Everything else in the recipe is there to mellow the horseradish out, so this ended up tasting much too smooth and creamy. My dining companioned compared it to horseradish scented air.

I like my horseradish hot, so even if I’ve got the freshest most powerful root on the block, I’d rather not have it tamed too much. I don’t think the honey was really necessary, it doesn’t really add to the horseradish experience, and it risks taking the whipped cream over into dessert territory. Similarly the whipped cream served to add volume, and dilute the horseradish, I’d frankly prefer grated horseradish with a little cream to make it saucy, and a boost of salt and pepper. The whipped cream made it a delicate airy foam, which just doesn’t seem like the right texture for horseradish. I’d rather treat it more like hot sauce, or wasabi, pungently lurking in the corner of my plate, waiting for each bite to be dipped with excited trepidation, and punishing those brave or foolhardy souls who overdo it. Admittedly this version is a bit safer to serve to your grandmother, but the risk of horseradish is half the fun.

If you want a good recipe for horseradish and whipped cream, check out the site of Lawry’s Prime Rib. Lawry’s serves it with prime rib at all their restaurants and the recipe is on line. You may have to “bump up” the amount of horseradish but it’s quite tasty.

Thanks, that sounds great.