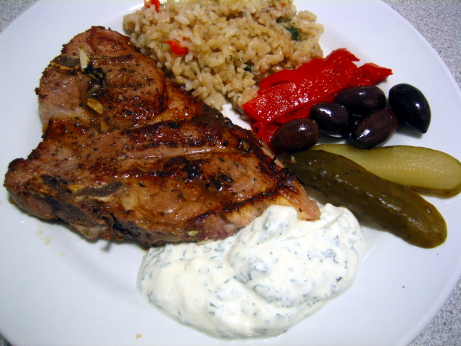 The world is clearly changing, and The Book is starting to get a little bit dated. It’s only 4 years old, but a few things have changed in that time. I mostly notice it with specialty ingredients, which The Book suggests I’ll have to get by mail-order, but that are available at my local grocery store these days. The array of imported fresh fruits and vegetables is staggering, and the burgeoning interest in food from other cultures means that formerly exotic herbs and spices are commonplace. This recipe pairs lamb chops with a minted garlicky yogurt sauce, and calls for taking normal yogurt, straining it through cheesecloth, and letting most of the liquid drain away. This is the home-brew version of Greek / Mediterranean / Baltic yogurt. These days every grocery store in my neighborhood has three different brands to choose from, and that’s not counting the ones with fruit on the bottom.

This yogurt is an example of the good kind of food diversity. A beloved product from another culture, made locally, and not incurring the environmental costs of shipping fresh fruits and vegetables halfway around the world. Although, The Project wouldn’t be possible without the insane system food system we’ve set up for ourselves. No matter how much I want it to be true, tropical fruits just don’t grow in Montreal, and Parmigiano-Reggiano is only produced in Parma. I try to buy locally produced things when I can, but between the diversity of ingredients The Book calls for, and the short growing season we have up here, it’s just not possible for most of the year. That said, I picked up my first CSA box (community supported agriculture, or farm share) last week, and I’m looking forward to eating as much Quebec produce as I can between now and November.

I make a variation on this dish all the time, and I was pleased to find a version of one of my standby dinners in the book. The idea here is to marinade lamb shoulder chops in lemon juice, garlic, dried oregano, and olive oil, then to pat them dry, season with salt and pepper, and pan fry them. Once they’re done the pan is deglazed with the reserved marinade, and once the marinade has cooked for a minute it’s poured over the chops. The lamb is served with a yogurt sauce made of yogurt drained through cheese cloth (I just used Mediterranean yogurt), garlic, fresh mint, salt, and pepper.

This is an extremely simple recipe, and it doesn’t call for anything flashy in terms of ingredients or techniques. When a recipe is a simple as this, details count. The approach and ideas behind this dish are absolutely solid, but some things could have been done better. My main issue was that the shoulder chops were tough. Shoulder meat is tougher than other meat, but that’s the beauty of using lamb, even the shoulder is quite tender. The chops weren’t all that flavourful either, the pan sauce was packed with flavour, but the meat didn’t take on much from the marinade. Both of these problems could have been solved with a longer marinading time. The Book recommends 20 minutes on the counter-top, but if I did them again I’d go with at least three hours in the fridge. Epicurious posters report marinading them for up to 24 hours with good results. The chops were also overcooked by the time they were browned, using a thicker chop would have taken care of that. The idea with the pan sauce is to make a fond while cooking the chops, and then to scrape up the browned bits when making the pan sauce. The Book calls for a non-stick skillet for this operation. This is just silly. Non stick = less sticking = less browned bits to scrape up = less delicious pan sauce. Also, high temperature cooking in non stick cookware isn’t the greatest thing for your health. Beyond the chops, The Book’s instructions would have you stir together the yogurt sauce and serve it immediately, but a sauce like this one needs a minimum of an hour to come together. When it’s freshly made it’ll taste fine, but what a difference an hour will make. .

I’m really fond of this style of dish, but this recipe didn’t work out for me. I’ll stick with my improvised marinades and yogurt sauces. This absolutely could have been a good dish with just a few changes, but as it was I can’t give it a rave review.