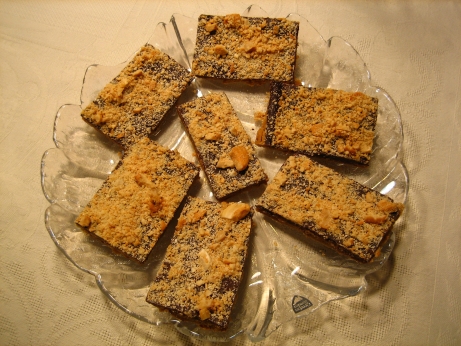 Opinion varied wildly about these bars. We brought these to dinner with another couple. The guy loved them, my dining companion hated them, and the other girl and I were of mixed opinions. They’re built on a fairly dense espresso flavoured cookie base, then topped with chocolate and salted roasted cashews.

I thought things were going well until the cashews. The cookie base was rich, full of espresso flavour, firm and a bit chewy. All on it’s own it would have made a very good cookie. Adding chocolate on top was a perfectly good idea, espresso and chocolate do wonders together. Adding cashews didn’t seem like a bad idea either, but this is where the problems came in.

The recipe called for a quite a lot of nuts, 3/4 of a cup, which may have been a bit excessive, 1/2 cup would have been fine. The nuts were supposed to be chopped. I thought I’d chop them with a few pulses in the food processor, which resulted in more of a cashew dust than anything else. The real issue with the cashew topping was the salt though. It’s possible that I just picked up particularly heavily salted cashews, but I don’t really think that was the case. Adding this much salt to a sweet bar made things very confusing for the palate. There was definately something wrong with the flavour, but I just couldn’t put my finger on it. Eventually my dining companion pointed out that they tasted like trail mix. Once she said it my imagination filled in the little bits of dried fruit, and my ability to imagine this as a refined after dinner square to be sipped with a macchiato disappeared. The final effect of these squares is like a coffee flavoured energy bar.

I had some of the leftover bars as afternoon snacks, and they worked much better in that context. There’s absolutely nothing wrong with the flavours going on here, other than the excessive saltiness, they were just poorly marketed.