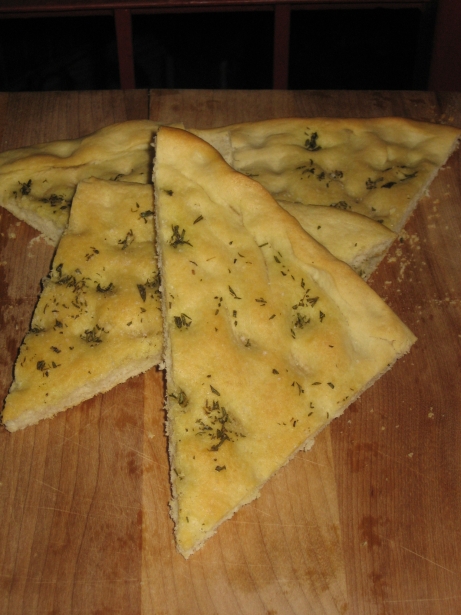 The recipe is the same as this one, but linked recipe forgets to list the water and salt for the dough in the ingredient list (they are in the recipe description).

I should start off by saying that this was absolutely delicious. It didn’t rely on rare ingredients or novel taste experiences to get there. It went with the straightforward combination of fresh baked bread, so much olive oil that drizzling is not an option, and enough salt to make it crunchy. This is the same tried and true combination that keeps the deep-dish pizza places of the world in business. You know that this is a Gourmet recipe and not a special from Pizza Hut because the focaccia doesn’t have a ring of cheese baked into the crust.

The recipe starts with a simple yeast dough, with some olive oil added in. It’s mostly kneaded in a stand mixer, then finished kneading by hand. Once the dough is coated in more oil and it’s been left to rise for 1 1/2 hours, it’s pressed into a baking sheet, covered with plastic wrap, and allowed a second rise. Obviously this second rise requires the addition of more oil, but this time it’s used to lubricate the baking sheet and plastic wrap. After the second rise it’s time for, you guessed it, more oil. This time the oil is mixed with chopped rosemary, and poured over the bread. There is so much oil at this point that the recipe directs you to make indentations in the bread for the oil to pool. Then the bread is sprinkled with sea salt, and baked at 425 ’till it’s golden. When it’s ready the bread needs to be inverted to get it out of the baking sheet. I’d do this over some paper towel because even the absorbent power of bread is overwhelmed by the amount of oil in this dish.

The focaccia was excellent, the bread was moist, with some chewiness, but a nice crumb and texture. The crust, both top and bottom, were wonderfully golden. The rosemary was fantastic, and really allowed to shine as the sole aromatic. If you serve this to friends they’ll beg you for the recipe, don’t give it to them. It would be like telling a kid about Santa. The bread doesn’t hold up well overnight. It’s not great cold, microwaving killed everything good about it, and rewarming in the oven didn’t to it justice. It’s best to get a crowd together and polish the whole thing off in one go.

The recipe uses a truly unconscionable amount of olive oil. The ingredient list calls for just under 1/2 a cup (7 tablespoons) of oil, to 5 cups of flour. But that doesn’t count the “generous” lubrication of the dough ball during the fist rise, or the baking sheet and plastic wrap during the second. I suspect the total is closer to 3/4 of a cup. That’s 1400 calories at 120 cal/tablespoon. We had the focaccia along with yesterday’s kale and chroizo soup for dinner, and certainly didn’t feel like we’d eaten lightly.

I think I’ll make this bread soon. My Rosemary bush will be donating some of her bounty this weekend and I wouldn’t want her children to go to waste.

Do it. And take a photo, I’d love to see how yours turns out. The dough is probably a real mess to knead without a stand mixer, you’re welcome to borrow mine if you don’t have one.

why does it not give you the recipe?