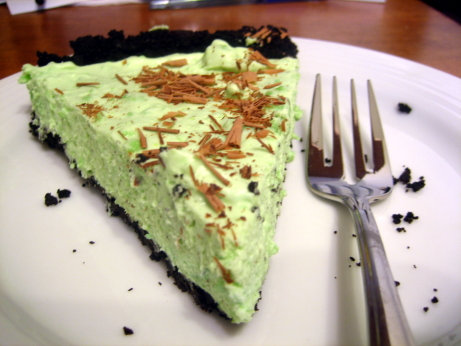 Grasshopper pie was one of the great frustrations of my childhood. It’s a hypnotically enticing green, it’s named after an insect, and it has cookie crumbs in the crust, this is obviously the perfect pie for an eight year old boy. Unfortunately it’s boozy enough to light with a match. My Papa had a fondness for it, and after dinner at big family gatherings my Nana would sometimes bring one out. The adults would sit around laughing, as my uncle would reverently bring a bite to his lips, close his eyes, and make exaggerated moans of pleasure while I looked jealously on. No, no, grasshopper pie isn’t for little boys, there are cookies for you in the kitchen. I could have screamed.

When I got a bit older, I was allowed to try a bite, and much to my dismay, it was foul. Sure it was minty sweet and creamy, but there was something medicinal and disgusting about it. Adults made no sense, alcohol categorically did not taste good, and ruined everything it touched. It was only after a few early experiments with drinking had rewired my brain and set up a pleasant conditioned taste association, that I came around on grasshopper pie. Now, I’m the one faking rapture to make my little cousins jealous.

The pie is easy to make. You start by smashing chocolate wafers into crumbs (get the kids who won’t be eating this pie to help), mix with melted butter, press into a pie pan, and bake. Meanwhile bloom gelatin in cream, add sugar, crÃ¨me de menthe (green), crÃ¨me de cacao (clear), and egg yolks. You then whisk this mixture in a double boiler ’till it comes up to 160F, and cool the bowl in an ice bath. Once it’s thickened, fold in whipped cream, and pour the filling into the crust. It then goes into the refrigerator for a few hours, and gets a sprinkling of chocolate just before serving.

My pie was going very well until I got to the cooling the gelatin mixture in a bowl of ice water step. I decided to save time by multitasking and getting the cream whipping in the stand mixer while I stirred the gelatin mixture in the ice bath. Everything was going fine ’till I stopped stirring to see if the cream had reached stiff peaks. By the time I got back to my gelatin it had set. I should have thrown it back on the still hot double boiler, melted it, and then chilled it more carefully, but I didn’t. I figured enough stirring and vigorous folding of whipped cream would do the trick. This was a bad plan. The gelatin mixture stayed in little boozy Jello clumps, and my whipped cream deflated. Because all the colour was in the Jello clumps the pie wasn’t looking very grasshoppery. I resorted to stirring in a few drops of food colouring, which solved things neatly.

I don’t think I could pick a favourite grasshopper pie of my life. There’s not much variation in the technique or the finished product. They almost inevitably taste great. Rich and creamy, with a boozy kick, and brisk hit of mint. The crÃ¨me de cacao is there in the background, providing that hint of chocolate which works so well with mint.
Next time I’ll remember that gelatin is happy to set for a second time. However, despite my flub-ups, I was quite pleased with this pie. I had to want grasshopper pie for many years before I could try it, and then want to like it for a few more years, now I can say that it was worth the wait.

At my dining companion’s request, I made this pie again last night. I was very careful not to cool the gelatin mixture too much, and I took it out of the ice cube bath as soon as it began to thicken a little bit. When I mixed in the cream I had exactly the same issue as the first time, chunks of green gelatin in white cream. I solved the problem by putting the whole mess back in the mixer bowl and beating it on high for a minute. Grasshopper pie continues to be delicious, but I’m convinced that the recipe is flawed. I don’t want to start retroactively modifying my ratings, but I think we’re still within the 5 second rule for this post, so I’m downgrading this recipe from 4 to 3 mushrooms.

As a Vulcan I am frustrated by you silly humans and your unwillingness to acknowledge how inferiour you are. If only you could suppress your emotional desire to be like “grown-ups” and stop this self-destructive, hedonistic urge to consume drugs.

As a human you surely wish to show me the error of my ways and introduce me to “fun”. The only solution is to settle this with a game of baseball on the holodek.

It should have become pretty clear that humanity rocks ass by now. You can eat your breadsticks with a knife and fork all you want, but you’ll still be married to Tuvok. Rom, get out there and bunt.

why are children not allowed to have any in your house, i have been eating this since i was litte it was my b-day cake for my 4 grade party, i am very offended that you make this childhood delight out to be a drunkards pie. for SHAME on you

Since grasshopper pie is pretty much a glorified jello shot, I feel pretty comfortable with my decision not to serve it to kids. Are you sure your mom didn’t make a virgin version?

Isn’t it fabulous? Does sound like your recipe is flawed though. Try Nigella Lawson’s recipe; she dissolves marshmallows in milk then folds in the whipped cream. Foolproof and delicious – and no, this one still isn’t appropriate to give to children!