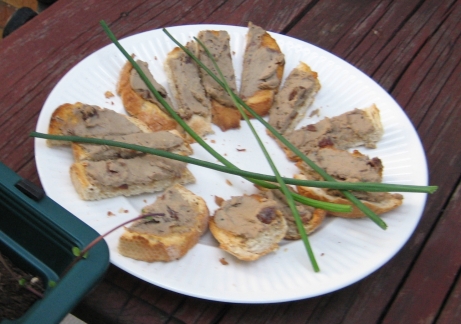 This worked out surprisingly well. My dining companion was a bit skeptical when I said I’d be making a pÃ¢tÃ©, but I think we were both suitably pleased with it. It was very smooth with a mild flavour, and the aromas of the cognac really coming through. I’d never had fruit in a pÃ¢tÃ© before, and the sweetness of the currants (I cheated and used small raisins) was a really nice addition.

Actually making this was a bit offputting. I didn’t much enjoy watching the livers swirl into a paste in the food processor, and tasting for seasoning while it was still hot was an experience I wouldn’t rush to repeat. Once it had cooled and had a bit of time to come together it was absolutely delicious. That said, this is not a pÃ¢tÃ© for those who are at all squeamish about liver. This is more like a smooth liverwurst than the more terrine like pÃ¢tÃ©s you often run into.

I had a good time gathering mildly grossed out looks from friends when I told them about this one, it would seem that liver isn’t too popular amongst my social set. Mes amis vÃ©gÃ©tarien, I devote this post to you.

Currants suck. Don’t ever use them. They take the fun out of what could be an enjoyable recipe.

Wow… such vim. I think of currants as one of the great underused fruits. Raisin’s are clumsily sweet, while currants have a wonderful texture, and taste fruity but not candied. I have very fond memories of my Mom baking scones full of currants on a Saturday morning.

Woohoo! I can’t wait ’till Saturday! MJ’s puke will be awesome!

Currants have done nothing for humanity. Currants scones are a mockery. Une mockerie! Seriously though their texture is too rough. The one good thing about raisins, especially when baked, is that they plump up after absorbing water and become little road-side bombs when ever you eat them. They blow up, then leave you crippled. But you’ll never forget them.

Nique: I’ll do my best to keep her food on the inside