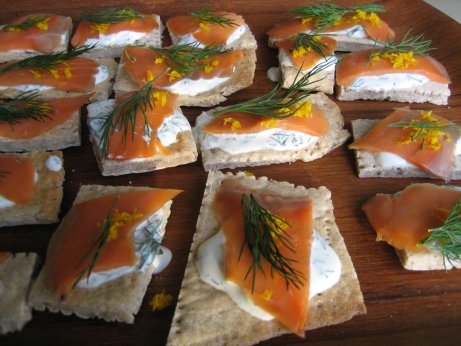 This is a funny recipe, it’s a play on the old standby of lox and cream cheese on pumpernickel. In this version you bake your own crackers, use dill infused crÃ¨me fraÃ®che, and dress them up with fresh dill and orange zest. I’ve never made crackers before, and my first experience suggests it’s exactly as pointless an activity as it seems. The recipe waxes on about how great the crackers are, and how they really make the dish. If that’s the case why is this recipe in the hors d’oeuvres section? They have a perfectly good Breads and Crackers section.

The crackers are made with a yeast dough using both white and rye flour, kosher salt, and toasted caraway seeds. The dough is allowed to rise, rolled into thin sheets, and allowed a brief second rise before baking. The final texture was unusual. It wasn’t cracker crisp, it wasn’t bready soft, it was crunchy on the outside, and tough and chewy on the inside. I wasn’t impressed with the final texture at all, and I actually had to gnaw through a couple of them. My sister, who was appalled at the amount of time, effort, energy, and cash recipes from The Book seem to require, quite liked the crackers. She felt that if you were going to go to the bother of making your own, at the very least they should be softer than boxed crackers. I felt that if they’re called rye crispbread crackers the least they could do was to be crisp. The flavour was very nice, the caraway seeds added a lot, but frankly these things just weren’t worth it.

The crÃ¨me fraÃ®che layer had a structural issue. The crÃ¨me was mixed with chopped dill, salt, and pepper, then added to the crackers. Unfortunately, crÃ¨me fraÃ®che is barely gelled when it’s scooped out of the container. Stirring in the other ingredients moved it back to the liquid side of things. It was prone to running off the crackers, and onto people’s laps. Not exactly ideal in a finger food. Once again the flavour was good, but the texture was off. Maybe a combination of crÃ¨me fraÃ®che and sour cream, or cream cheese would have provided the richness and flavour, while staying where I put it.

The flavours in the dish were right on. The crackers were delicious, rye and carraway are old friends. The dill and crÃ¨me fraÃ®che played well with the smoked salmon, and the orange zest set the whole thing off, making it lighter and brighter, and cutting some of the oiliness of the fish and richness of the crÃ¨me. I also thought these appetizers looked great, despite the odd dribble of crÃ¨me fraÃ®che. Unfortunately the texture of the crackers left a lot to be desired, every grocery store has much better substitutes for hardly any money and no effort. The rest of the dish was pretty standard fare, the crackers were the make or break aspect of the dish. In this case they didn’t break easily enough.