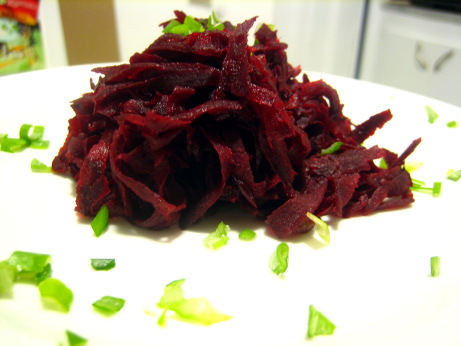 This was a very simple, and highly effective preparation for beets. My dining companion is mildly obsessed with beets, and we certainly eat more of them than the average couple. We tend to stick to Ukrainian, or Eastern European preparations, or pair them with goat cheese in salads. This week a friend brought an Egyptian preparation of beets in Mediterranean yogurt to a pot luck which was just delicious. We’d never considered trying this recipe’s method before, but I think we will again. The beets are shredded, simply sautÃ©ed in butter with lime zest, then tossed with a little more butter, lime juice, salt, and pepper, and served with chopped scallions.

The Good: This was remarkably simple, and unexpected. Beets don’t make me think of limes. Beets and some type of acid makes perfect sense, but limes have got such a particular tropical floral scent that I’d just never considered them working with beets. In the end the sweetness of the limes and of the beets played very well off each other. There was just enough butter to make this dish cravable, but it remained quite light, and although my picture doesn’t really do it justice it was a very striking dish. I was very pleased that this took all of fifteen minutes to make.

The Bad: I have nothing bad to say about the final dish. It was simple, satisfying, and very tasty. The only downside to the preparation is that grated beets tend to stain. Beet juice comes off counter and floors nicely, but clothes can be a bit of a problem. I would also recommend using a plastic cutting board. It’s actually a good check to see if your cutting board is getting too old and scarred, the beet juice will rinse right off the surface, but any deep groves will be stained purple.

The Verdict: We’re fond of beets and serve them to all comers at our house. We’ve had several guests who were kind of tentative about beet eating when they arrived, but most of them have become converts. If beets aren’t one of your pantry staples this is a nice introduction. I thought it was a bright, fresh, and wholesome, take on one of our favourite vegetables.