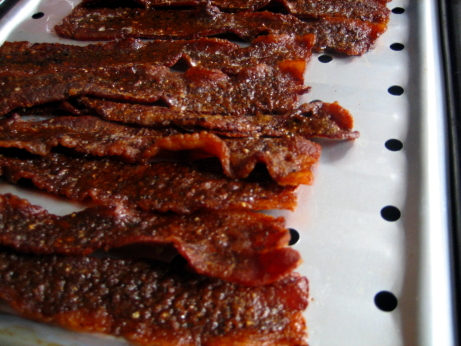 The food blog world has been swamped with recipes for caramelized bacon with a kick, so I decided that now would be a good time to see what all the fuss was about. After trying this recipe I’ve decided it’s just a gimmick, and not a worthy treatment of bacon. I get the concept, and can see the appeal, a dish that’s simultaneously sweet, smoky, salty, and spicy could be the holy grail of addictive breakfast treats. Alas, that’s not how this dish turned out.

The method is simple, but just because it’s easy to do a thing, doesn’t mean you should. You cook thick-cut bacon on a broiling rack in a 350 oven for 20 minutes, flip it over, and spread on a mixture of brown sugar, cayenne, and black pepper, then continue baking for another 15-20 minutes.

In re-reading this recipe I realize I missed the whole thick-cut bacon instruction, and used the normal stuff. That meant that my cooking time was significantly shorter, and I had proportionally more of the sugar-spice mixture than the recipe intended. Consequently my bacon was sweeter and spicier than it should have been. I think I’ve decided that any amount of sugar and spice on my bacon is too much. The flavour wasn’t bad precisely, it still tasted like bacon, but my palate had to filter out distracting brown sugar and cayenne flavours to get to it. Most of my guests thought it was sort of OK, but one just hated it, I think he found this dish personally offensive.

If there’s one thing the internet doesn’t need it’s another ode to bacon, but it’s pretty well understood that bacon is near perfect all on its own. You can use it to make other dishes better, but trying to improve the bacon itself is a fool’s errand.