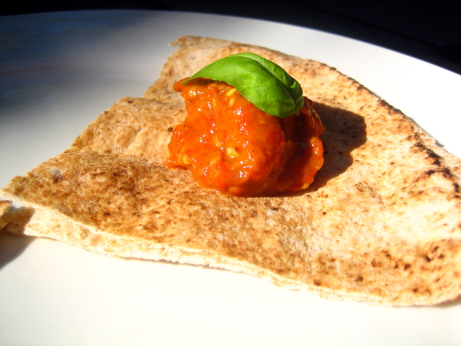 I served this dip along with the tapenade from the other day, and was similarly underwhelmed. This dip had a bland, mushy flavour, that didn’t really do much for anyone. I mentioned that the tapenade was overpowering, and this helped thin it out. Unfortunately, “dilutes tapenade” is one of the better things I have to say about this dip.

There’s nothing particularly wrong with the ingredient list here. You could probably make a fine dip with eggplant, red pepper, olive oil, garlic, lemon juice, jalapeÃ±o, salt, and pepper. Unfortunately the cooking instructions sabotage the goodness of these ingredients. Basically you roast eggplant and red peppers, remove the skins, and purÃ©e the flesh with the rest of the ingredients. You then transfer the purÃ©e back to the stove top, and simmer it for another 20 odd minutes to get rid of excess water.

Roasting the eggplant and red peppers sounds like a good idea to me, but the recipe falls apart from there on. You end up taking all of these pungent aromatic ingredients, garlic, lemon juice, jalapeÃ±o, and extra-virgin olive oil and killing them by simmering them. Raw garlic and chiles work wonderfully in dips, and I don’t see any need to cook them at all. If you want to mellow the harsh edges, then consider building extra flavours by roasting the garlic cloves, or at least mincing and browning in oil. Garlic cooked with wet methods takes on an unpleasant kind of metallic taste, and gives up the sharp potency and fruitiness of it’s raw form. The jalapeÃ±o would similarly benefit from some dry heat to bring out the smokiness. Cooking extra-virgin olive oil and lemon juice is just insanity, uncooked they’re complex and full of layers and interest. Heat them beyond a certain point, and the lemon juice is just an acid, and your nuanced grassy, fruity, olive oil becomes indistinguishable from canola.

What kills me about this recipe is that the murder of all those flavours is totally unnecessary. You could easily make a purÃ©e of just the eggplant and red peppers, simmer that, and then add the rest of the ingredients. The texture was one of the highlights of the dip though, smooth, silky, and nicely emulsified, so it’s probably worth getting rid of at least some excess water.

The recipe says that the dip needs to come together in the refrigerator for at least a day. I served it about 6 hours after making it, and was disappointed by it’s blandness and lack of personality. I figured it just needed to rest longer, but it was still going nowhere and doing nothing for me by the second day. I eventually got rid of the leftovers by integrating them into a pizza sauce.

I should say that my dining companion liked this dip, and enjoyed that it mostly tasted like eggplant and red pepper, with a mild background of other flavours. I’m definitely biased towards big bold flavours in a dip, and I missed them. Subtle dips can stray too easily over into baby-food territory, which is not for me. The Epicurious reviews suggest that this is a love it or hate it recipe, so our disagreement isn’t unusual. This recipe has the makings of a nice dip, but at least to my palate it was a failure.