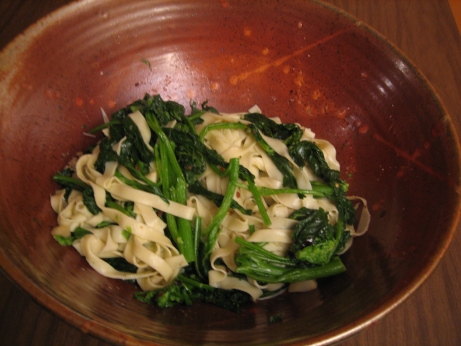 I made this fettuccine using the Basic Pasta Dough recipe. It’s kind of a silly recipe as it could be replaced with the words “follow the instructions that came with your pasta machine”. Basically it involves dividing the dough into 8, and working each piece through the widest setting of the rollers a few times, then progressively narrowing the rollers until the pasta is pretty much translucent. Then the pasta is allowed to dry for half an hour, before being run through the fettuccine slicing attachment.

This process worked fairly well. I was using a roller that attaches to the drive shaft of my mixer, and it took a bit of playing around to get the mixer speed vs resistance to offer it right. I had pasta bunching up on one side, or getting too thick in sections, for the first few pieces I put through. Once I got the hang of it it was easy and fun though.

As I mentioned before the taste of the pasta wasn’t that different from dried packaged stuff. In an application like this I would probably stick with the dried unless I was having foodie friends over. It’s nicer to say that you made your own pasta, but I honestly don’t taste that much of a difference. I’ve read that the difference comes in the way the past interacts with a sauce, but I’m not clear on which way it’s different. I couldn’t tell you which one is superior either. I’d say in it’s basic form this fettuccine is probably more effort than it’s worth (which is in no way a comment on the worth of making your own pasta, just fettuccine). However, getting the technique down is certainly worth it. I can imagine all sorts of fun additions you could make to the dough and integrate into the pasta. Maybe some flavourings? perhaps substituting some fancy flour for standard AP? how about some colouring agents? a little beet juice and you’d have a delightfully purple dish.

This was a good launching pad, and fun to make. I’d suggest everyone get around to making fettuccine at least once in their lives, but it’s absolutely not worth the effort for a Tuesday night supper.