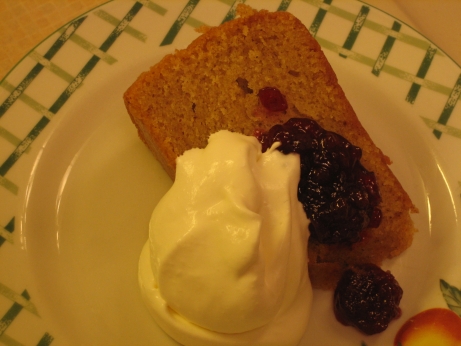 In the comments for yesterday’s cassoulet someone mentioned that many of the recipes I’ve posted are heart attacks waiting to happen. This cake is no exception. With 8 eggs, 2 sticks of butter, and a bunch of almond paste it is no where near anyones definition of a light finish to a meal. The cake is dense and very moist, topped with Kirsh flavoured whipped cream and lingonberry preserves.

The cake recipe is a very standard method, but with funny proportions. It’s only got one cup of flour to 7 ounces of almond paste, 1/2 lb of butter, 8 eggs and 1 1/2 cups of sugar. The almond paste is replacing some of the flour, but why does it need 8 eggs?

With all the super rich stuff that went into it, the result is a super rich cake. With so little flour to provide structure it didn’t rise very much. The texture was like a very moist brownie that had been allowed to rise a bit more than normal. The almond paste did a good job of permeating the cake with almond flavour, but it could have been boosted with almond extract, or an almond liqueur.

The Kirsh whipped cream topping was a good concept. Almond and cherries are one of the magical flavour combinations of our world, and I’m glad to see it celebrated. The Kirsh gave the cream an alcohol bite that helped cut some of the richness. The cream was a bit potent to eat comfortably though. There were bites where I misjudged the proportion of cream to cake and just found it to be sour and unpleasant.

The lingonberry preserves were a very nice touch. Apparently this is a Scandinavian cake, and nothing says northern Europe like lingonberries. The average megalomart doesn’t carry these preserves so you’ll have to go to a specialty shop, or Ikea. Those masters of flat-packed over designed furniture sell a broad array of Swedish delights, including three different types of lingonberry preserves (one with chipotle).

This cake keeps forever, I divided it and froze half for a few months. The remains in my fridge were good for at least a week. This is a good thing, because the cake is so rich an average sized family would need that week to get through it. The lingonberry preserves were the best part of the dish, the cream topping was a nice counterpoint, but it was a bit too boozy. The cake’s flavour was fine, and the super moist texture had it’s own appeal, but overall I can’t recommend it because of it’s unconscionable ingredient list. A simple yellow cake with almond flavouring would have served the same purpose, and helped everyone to avoid an insulin coma.