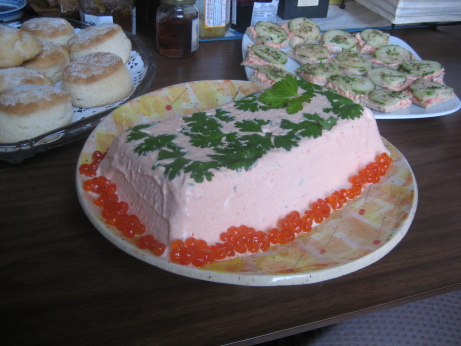 I was really looking forward to this recipe, but I didn’t expect to like it at all. I’ve never had a salmon mousse before, and it has a certain reputation. Pop culture uses it to indicate that a character is out of touch, horribly backwards, or disturbingly gross. I suspect many people can’t think of THE SALMON MOUSSE without imagining the grim reaper from Monty Python’s The Meaning of Life. It turns out that salmon mousse became popular enough to earn this iconic status because it’s delicious. Maybe its reputation got dragged down along with the casserole-generation’s jellied hot dog and marshmallow salads.

The mousse is made by folding whipped cream into a purÃ©e of smoked and canned salmon, sour cream, and tabasco, with scallions and bloomed gelatin stirred in. The mixture is poured into an oiled mold, whose bottom has been lined with cilantro leaves. The mousse is refrigerated, unmolded, and the base is surrounded with salmon roe.

I was surprised at how much I liked this spread over a cracker. The airy mousse had a great consistency. I was worried it would end up gummy and jellied, but the gelatin just barely set it, leaving it soft and smooth. The smoked salmon was the backbone of flavour in this dish, The canned salmon kind of disappeared. The salmons flavour was intense enough that it could stand being diluted in the whipped cream. In a happy accident I quadrupled the tabasco (1 tsp instead of 1/4 tsp), which added some needed punch, and helped to counter the richness. The cilantro leaves were pretty, but I didn’t really think they added anything. If you’re going to top the mousse with cilantro, then it should have some cilantro flavour. Next time I’d chop some up and stir it in. The salmon roe had mixed reactions from the crowd I served this to. It was incredibly intense, and added a burst of salmon essence to the mousse, but some people felt it was a bit much. I enjoyed the roe, and would use it again.

This kind of dish has been out of fashion for a long time, but it’s definitely ready for a comeback. The molecular gastronomy (or whatever you want to call it) set are making savoury gels of everything they can get their hands on, and the food fashion conscious are eating it up. Maybe you can reintroduce the salmon mousse by claiming that your salmon are organic, and telling people you set it with agar agar. Sure it’s whipped fish Jello, but it tastes great, and it’s weirdly elegant. I love that this dish could fit in at a regency banquet, at an “I Like Ike” booster, or as an experiment in geometry from the people behind Ideas in Food.