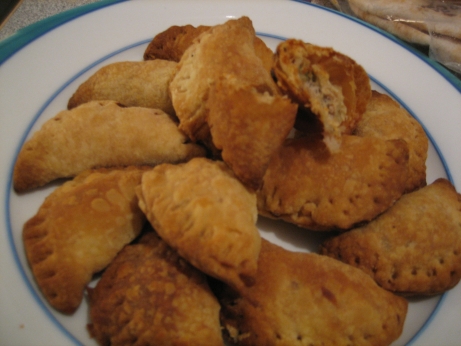 These bite sized party favours are built with the duct tape of the home entertaining wold: puff pastry. A filling of oil-packed tuna, pimientos, capers, and onion is added to rounds of puff pastry, which are folded into semicircles and crimped. They can be frozen at this point, and baked whenever your heart desires.

The filling was very salty, and didn’t really taste like tuna. As I mentioned yesterday I don’t have much love in my heart for pimiento-stuffed olives, and they failed to impress me again here. The capers were really the saving grace, they contributed to the salt problem, but they brought a lot of flavour along with them. With more tuna, and better olives I think this could have worked out really well though. The ideas are sound, but I get the feeling they tried to make the dish too easy. Asking us to pit a quarter cup of olives isn’t an unreasonable demand, and they certainly don’t shy away from it in other sections of The Book.

The puff pastry section of the recipe was trickier than I would have guessed. The recipe calls for a round cookie cutter in the special equipment section. I didn’t have one and tried to make do with the edge of a wine glass. This isn’t a good idea, both because my glass couldn’t cut through and it took forever to go around the edges with a pairing knife, and because using a blunt instrument on puff pastry interferes with the puff. Puff pastry is made by layering butter and pastry, and when it hits the heat the water in the butter creates steam, thus puffing the pastry. Smooshing the pastry too much can compress the pastry layers, and displace butter messing with the puffing. In any case, this recipe makes 50 hors d’oeuvres, and the cutting, folding, crimping process takes quite a while. The recipe suggests it should take one hour active time, but I’m sure it took me two. I was quite late to the dinner party I was bringing them to, which is pretty bad form when you’re bringing the appetizers.

Before you’re ready to serve the empanaditas are baked on a cookie sheet at 400 degrees. The recipe says this should take 20 to 25 minutes. Mine were overcooked and dry within 15. As I was cooking these at a party, I had no way of checking that the temperature I set the oven to was really the temperature inside the box, but that’s a pretty big discrepancy.

In the end these didn’t come out too well. A few changes to the lineup in the filling, and more attentive baking on my part might have improved them dramatically. As is, mine were dried out and heavily salted. I like the concept of an empanadita, people might feel sheepish admitting it, but everyone likes mini versions of regular sized food. In this case the execution left something to be desired though.