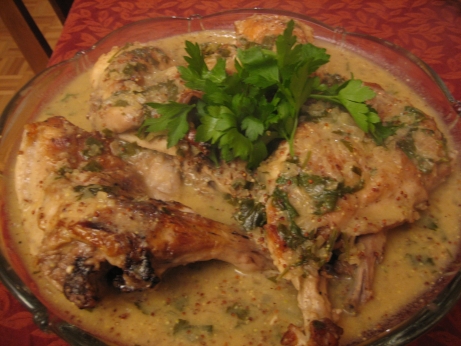 The recipe is very similar to this Epicurious version. Except that both Dijon and Whole grain mustard are used, and 2/3 cups shallots are browned in the pan before deglazing the fond.

Rabbit with… wait for it…. wait for it…. mustard sauce! yawn. It’s good, don’t get me wrong. But it seems like people hardly eat rabbit at all, and most of them will never have tasted it without a mustard sauce. This recipe follows three or four variations each for squab, poussin, and quail. Beyond the question of why the lone rabbit recipe in the book is tacked on to the end of the poultry section, why did it only get one rendition? I know a lot of people are uncomfortable eating cute little bunny rabbits, but they’re delicious. Similarly the book is devoid of recipes for venison, wild boar, or horse, all of which are on the menus around Montreal. Horse is probably just a Quebec thing, and Canada is developing it’s culinary identity around a lot of game meats, but those ingredients are much more familiar to me than any of those little birds.

Anyway, the recipe itself was pretty good. It’s simple, and it’s a classic for a reason. I found a beautiful rabbit for this one, probably closer to 4 pounds than the recommended 3. I liked the textural addition of whole grain mustard as well. It’s a very simple and unpretentious dish. The rabbit is browned, the shallot – white wine – mustard sauce is brought together, and the rabbit goes back in to cook through. Afterwards the rabbit is removed, the sauce thickened, and some parsley is stirred in at the end.

I’ve complained many times about parsley, and all of my objections stand. Also, stirring parsley into hot dishes doesn’t do anything for it. It’s only use in my mind is for a bright green punch of colour, heating it so it turns limp and grey sort of defeats the purpose.

It’s not the recipes fault, but it felt like something was missing. That something is tarragon. My father often made rabbit with mustard sauce growing up, particularly while he was living in Belgium. His version always added tarragon to the mix, and it was absolutely delicious. Taragon and mustard are natural buddies, and mustard with rabbit is a classic. It’s such a natural fit, but a quick search for tarragon mustard sauce recipes didn’t turn much up. The anise flavour adds it’s own dimension, and compliments what’s already going on in this dish. I’d highly recommend trying it.

This dish tasted good, was easy to prepare, and at least rabbit made the book in some fashion. It wasn’t inspired, but it was a solid basic. If you’re unfamiliar with rabbit this is a great introduction.