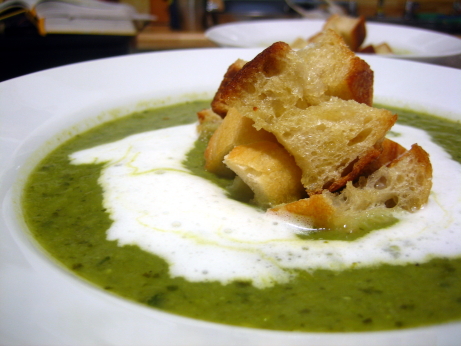 My counterpart at work used to make this all the time, and I never liked it. I finally figured out that it was because she wasn’t blending it well enough, and when I finally got around to making it I pureed the hell out of it, which made it as smooth as silk. I can see from your photo that you’ve left it a little chunky–if you ever give it another shot try blending it for like ten minutes.

Also, what are you doing eating hot soup when it’s 90 degrees? 😉

P.S. I’m totally with you on the croutons.

Thanks for the tip, I blended it for a good while, but it didn’t really smooth out. 10 minutes might make the difference. I was also thinking of passing it through a sieve. Alas, that won’t do much to solve the hot mint problem.

I’m behind on blogging the recipes I’ve cooked, so it was cooler when I ate this.

Hi: I just came across your web site as I was looking for comments on the recipe for Duck Breasts with Orange-Ancho Chile Sauce which I’m making tonight. I think pea soup needs to be strained through a fine sieve to get those nasty skins out of there. Last year we went to a “Food and Wine Rave” at the Brookstreet Hotel here in Ottawa which is where you pay money to prepare the food in a professional kitchen under the watchful eye of Executive Chef Blackie. One of the dishes was a pea soup and we strained it through a chinois. Funnily enough, later that summer we went and had pea soup at another high-end restaurant and they had NOT strained the soup. It was incredible, the difference it made to the finished product.

Hi, thanks for the tip. I don’t have a chinois, but I think it’s going on the list of kitchen purchases I can no longer put off. Strained soups are certainly a lot more elegant, and the perfect texture is an important part of the soup experience. I’ll have to give it a try.