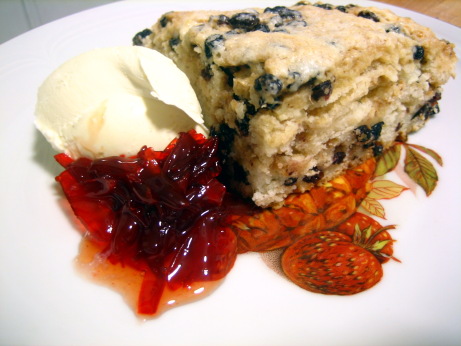 Scones are serious business. Done right, they’re transcendent, rich, with just a hint of sweetness and a striated flaky texture. A scone should be substantial, but not dense. Unfortunately they’re often done very very poorly. Starbucks gets my vote for worst mass market scone. Their oversized scones are dense enough to sink, and so dry you can’t get through a bite without a sip of coffee. The few times I’ve eaten them I’ve ended up with an Elmer’s school glue paste in my mouth, and a boulder in my stomach. This scone philosophy may work for Starbucks’ bottom line, but it has no place in my kitchen.

This recipe has a much happier take on the classic British treat. Here you make a quick dough by working butter into a mixture of flour, sugar, baking powder, and salt, then gently mixing in half-and-half until a sticky dough forms. You stir in currents which have been plumped in just a couple of tablespoons of hot brewed tea, form the dough into a disk, score it, brush it with half-and-half, then sprinkle it with sugar and bake.

The Good: The scones came out with pretty much the texture I was hoping for, tender-chewy cake stacked in airy layers. The cream and sugar brushing gave a nice gloss to the upper sides, and the bottoms were just barely golden. All in all a pretty darn good scone.

The Bad: I’m quite picky about scones, so while the results were generally good, there was room for improvement. First, they were a little too dry, substituting full fat cream for half-and-half might have taken care of that. Second, I like currants as much or more than the next guy, but half as many would have been plenty. Third, I wasn’t a huge fan of the bake, and then cut, plan with these. I prefer to bake scones separately, because the sweet and shiny outer layer is the best part. This cut-a-disk-up-like-a-cake strategy messes up the surface to volume ratio. Fourth, I thought going in that soaking the currants in tea might add a tea flavour to the scones, but it really did nothing at all. There’s nothing wrong with not-tea-flavoured scones, but the plumping in tea step was a bit of a waste of time. If there’s no way to get the tea above the threshold of human perception I’d just use hot water instead. Finally, this recipe is for an unusually small batch. It makes just 4 scones. That’s about breakfast for two. If I’m going to go to the trouble of making scones I’d like to count on some leftovers, so I’d plan on doubling or tripling the recipe.

The Verdict: Overall this is a solid scone recipe. It’s not my ideal, but I think scones are largely a matter of personal taste. It comes fairly close to what I’m looking for in a scone, and it’s a good basis for further experimentation.