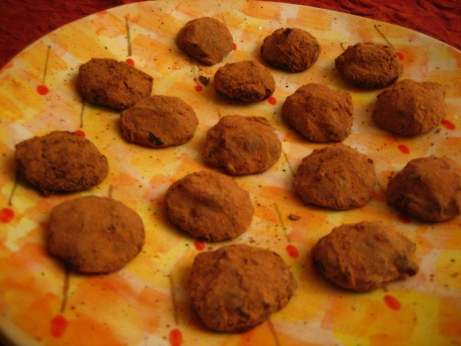 This recipe has three ingredients, chocolate, cream, and cocoa powder. Almost by definition the success of failure of the recipe is in the quality of those ingredients, and the method of combining them. I used the wrong ingredients, and ignored parts of the method. They still came out tasty, if a bit ugly. The recipe calls for 56% cacao Valrhona chocolate, I ignored this and used another good quality dark chocolate with about the same cocoa percentage. I couldn’t find the Valrhona and decided the recipe was just being snooty. I’m not sure if it would have made a difference, but you should definitely use a chocolate you like the taste of before it’s used in the ganache.

The recipe is dead simple, the cream is boiled, and then poured over the cut up chocolate, it’s then gently stirred (in concentric circles starting from the centre, while standing on one leg, under a full moon). The resultant ganache is then cooled and piped into truffle shapes. After the truffles are frozen they’re smeared with bit of melted chocolate and tossed in cacao powder before serving.

I ran into a bit of trouble in the piping section of the recipe. I didn’t have the right size tip and found I couldn’t pipe and elegant looking truffle with the desired soft point on top. Even cooling the ganache for the recommended time I needed to put in in the fridge for a while to get it to firm up enough for easy piping. As you can see in the picture above I didn’t get anything near the elegant teardrop shaped confections I was going for. Real truffles are ugly and misshapen, and so are mine. I’m not going to let myself feel too bad about it.

The coating with chocolate and tossing in cacao powder step was much messier than I would have predicted. I think it takes a lot more planning, and forethought than I gave it. You need to reserve one gloved hand for smearing the chocolate and dropping the truffles into the cocoa powder, and one hand for extracting them to a sheet pan on the other end. Mixing this method up results in the dreaded club hand. I’ll know better for next time.

Although this was a really simple recipe I have hardly any experience working with confections. I found it to be more complicated than it seemed at first. But, I’m sure a second attempt would go much more smoothly. Flavourwise, they were good. It’s chocolate and cream, it tastes like chocolate and cream. Fancy chocolatiers seem to be able to take those same ingredients and make absolute magic happen. For me, this recipe produced tasty little after dinner treats, but there was nothing transcendent about it.