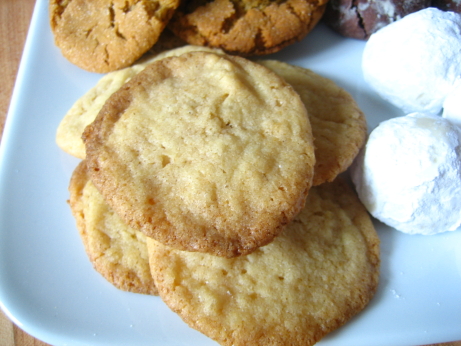 I made these cookies in the middle of a cookie-baking frenzy, I was buying ingredients for about five different types, with a couple of backup shopping lists in case I couldn’t find all the stuff for the first tier cookies. Somehow the crystallized ginger that this recipe called for never made it into the basket. I discovered this once I was home and ready to start baking, and just not at all interested in going out to hunt down crystallized ginger. I’m an industrious guy, I figured I could crystallize my very own ginger. I looked up a few recipes on the web (The Book doesn’t have one) and it didn’t seem too difficult, although the recipes were very inconsistent. Some called for boiling chopped ginger in a sugar syrup for about 20 minutes, some asked you to boil the ginger in syrup for an hour, let it steep in the sryrup for a day, boil it for another hour, and to repeat this process every day for a week. Since I was interested in using this ginger for cookies that very afternoon I went for a middle ground and chopped the ginger very finely, and boiled it in a concentrated syrup for 2 hours. It was no where near as good as the store bought kind, quite ugly, and very hard, but it basically tasted like candied ginger. No one else was much interested in my crystallized gingers, but they were my little treat, I loved them with a cup of coffee in the afternoon.

The ginger did a serviceable job in these cookies. They’re a fairly standard cookie base of butter, brown sugar, egg yolk, and vanilla creamed together, crystalized and ground ginger mixed in, and a mixture of flour, baking powder, and salt gently stirred in. They came out as very thin and crisp cookies, studded with the ginger chunks. “Real” crystallized ginger is soft and pliable, whereas my improvised version was quite tough. On the first day they were baked they had a nice crispy exterior with a chewier interior. The recipe says they keep at room temperature for a week, but I found that they lost their crispness overnight. I really would have preferred the chewiness of the professionally produced product in the cookies. Other than that they were nice, they didn’t blow me away, and I probably wouldn’t have asked for a recipe if they’d been served to me, but they were perfectly good.

A strange thing about these ginger cookies is that they weren’t particularly gingery. Beyond the crystallized ginger there’s only 1/4 teaspoon of ground ginger in the recipe. If I made them again I’d up that to 1 teaspoon, many of the Epicurious posters suggest that it improves the cookies dramatically. As written this recipe makes a nice buttery cookie, with a hint of ginger flavour and chewy bites of crystallized ginger. It’s possible that I missed out on what this recipe had to offer with my sub-standard ginger, as they were I liked them well enough, but wouldn’t go out of my way to make them again.