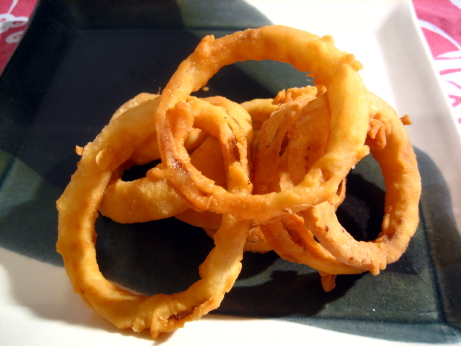 I can’t find the recipe for this one online.

Way back in the beginning of The Project, I mentioned that I’ve been a little gun shy about deep frying in my kitchen ever since I put some very wet potato wedges into a pot of massively overheated oil and turned my stove into a fireball. I try to do most of my frying outside on the barbecue’s side burner instead. The thought of raining fiery death upon the downstairs neighbors innocently sitting on their balconies hardly bothers me at all. It has the additional advantage of not stinking up the whole house. I take as many of my stinky cooking projects outside as I can, the hipsters next door may not appreciate it, but keeping my dining companion happy is much more important.

I’ve never made onion rings before, but I’ve eaten my fair share. I like rings with a thin crisp coating of batter, that stays attached to the onion that it doesn’t slither out along with your first bite. The batter should be flavourful on it’s own, but not excessively seasoned. Simplicity is a good thing, but these rings may have been a bit too simple. The recipe calls for sliced onions to be dipped in milk, and dredged in flour and salt, then fried at 370F for a couple of minutes. They passed the thin, crisp, and well attached to the onions test, but they were a little lacking in the flavour department.

I appreciate the minimalism of the recipe, lots of other onion rings recipes call for eggs, baking soda, cornmeal, bread crumbs, and other nonsense. A simple mixture of flour, salt, and a liquid should be quite sufficient. I would have preferred the liquid to be beer however. Using milk is nice, because you don’t have to wait for the beer to go flat before using the batter, but beer tastes so much better, and onion rings just don’t say dairy to me. I would have also preferred a little more salt mixed into the flour. Obviously you can add salt later, but it’s better when it’s in the batter. In fact, a batter would have been nice too. In this version you dip the onions in milk, dredge them in flour, dip them in milk again, then once more into the flour. It was a bit of an operation to do the double dredge, and it made a mess. Just mixing up a batter of the right consistency and sticking the rings in there wouldn’t be any harder, and it would be a lot faster.

I love that this recipe is in the vegetables section of the book. Finally my nine-year-old self’s “Eat your vegetables”, “But mom, onion rings are a vegetable” logic is getting the respect it deserves. For a first attempt at making my own rings, I was reasonably pleased with these, they were golden, crisp, and quite tasty. These aren’t the ultimate rings, but refining my perfect recipe is going to be a fun process.