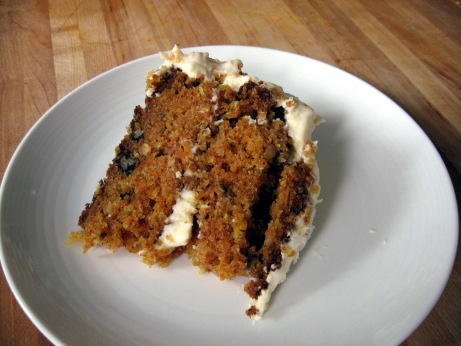 The recipe courtesy of The Ulterior Epicure

Sometimes the stars just don’t align, and the baking Gods abandon you for a day. I’ve learned a lot about cooking and baking through this project, and I’ve gotten to a point where I rarely make the boneheaded mistakes that plagued my early experiments, but there’s always room to regress. Today’s flub up was ignoring the instruction to “butter and flour cake pans, knocking out excess flour”. Every single baked good in the book calls for this step, and it’s become such a familiar phrase that I think I literally didn’t see it when reading the recipe. Sure something felt wrong while I poured the cake batter into the pans, but I was working on three other things at the time and didn’t give it much thought. The finished product suffered as a result, but I’m going to rate it anyway.

This is a pretty straightforward cake, but it does have quite a few ingredients. Beyond the basic cake stuff (flour, baking soda, baking powder, and salt, vegetable oil, eggs, sugar) the cake mixes in a healthy dose of grated carrot, cinnamon, crushed pineapple, sweetened flaked coconut, walnuts, and raisins. The raisins were optional, and I opted against. The cakes are split into two 9 inch round cake pans and banked for ~40 minutes. Once cooled they’re stacked and frosted with whipped cream cheese, butter, vanilla, and icing sugar.

The Good: The cake tasted great. It had excellent carrot flavour and the cream cheese frosting wasn’t too sweet or too heavy, and set the cake off nicely. I like walnuts in a carrot cake, and this one was no exception. The frosting had a great texture, going on easily, and holding its shape quite well, as you’ll read below the underlying cake had some serious structural issues, but if I had to try to ice something with the texture of a jello salad again, this would be a pretty good frosting option.

The Bad: My main issues with the cake were with the enormous almost goupy crumb of the cake, and its total lack of structural integrity. The recipe describes it as an unusually moist cake, but I think my mishaps turned a moist cake into a barely solid cake. Without the butter and flour in the pans, the cakes stuck. The first cake I tried to unmould fell to pieces, with the baked-on bits staying firmly in the pan, and most of the extremely moist and soft innards flying through the cooling rack I was trying to unmould onto. I tried to free up the bottoms, but the cake was just tearing while it was still warm. Instead of cooling the cakes on racks, I left them in their pans, and was able to get an offset spatula in to free them up once they’d cooled. This probably means that the cakes steamed as they cooled, instead of crisping up on the outside. I can’t know how the cooling in the pan affected the texture of the cake, or how the rough extraction from their pans affected the overall integrity of the cake. As it was, the cake was nearly impossible to cut, it was as malleable as an angel food cake, and the slices crumbled as I tried to serve them. Even chilled the next day getting a piece out as a whole was a challenge. The soft and goopy frosting added more to the structural integrity than the cake itself. The pineapple was added to this dish to make it extra moist, and it did its job. At least with my mixed up cooking instructions that extra moisture probably made a bad situation worse. More importantly, it didn’t taste all that good. I don’t think carrot and pineapple are a natural pairing, and I just found it out of place.

The Verdict: A lot of what went wrong with this cake was totally my fault, but things like the over-large crumb, and not so nice addition of pineapple were certainly problems with the recipe. Looking beyond the serious textural issues, the cake did taste very good. It wasn’t my absolute favorite carrot cake, but it did a good job of delivering carrot flavour in a cream cheese icing package. I suspect that baking this in a 13×9 pan instead of trying to make it a layered cake would make the textural issues much less important, and it would be just as delicious. The cake that I produced was not fit to serve to guests, and the cake I made is the cake I have to rate, but I think I’m going to give this recipe another chance in the next couple of months, and I might decide to revise the rating upwards then.