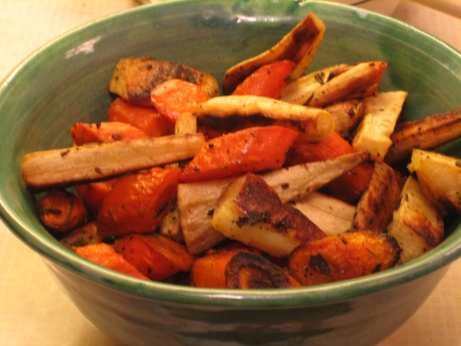 I nip, you nip, we all nip for parsnips!

I love them mashed, boiled, grilled, broiled, sauteed, and particularly roasted. They behave almost exactly like carrots, they look like carrots, they taste quite a bit like carrots, and yet… the carrot is a superstar of the vegetable world, and the poor parsnip is drinking alone at the bar slurring “whachs ur problum, not ornge enough fur ya??” at unsuspecting passersby. They’re not as sweet as carrots, but I think they bring a lot more flavour to the table. They’re also a whole lot starchier, meaning that they pretty much have to be cooked.

It’s hard for me to be objective about this recipe, because I’ve been making my own version of it for years. I normally toss carrots and parsnips with oil, salt, pepper, and assorted dried herbs, then roast them. The advantage this recipe has is the addition of water to the pan which helps the vegetables get tender, then as the water evaporates they’re able to brown up. When I make this I generally just use dried herbs, I’m not sure it makes a whole lot of difference in a dish that’s roasted for an hour. That said the sage and rosemary were delicious.

This is one of those pretty basic recipes that’s hard to rate. It would be delicious if you followed the recipe exactly, or if you improvised wildly around it. But it was solid, and it won’t lead you wrong.

Hey i have wondered how much you would calculate to set your theme up on my web log for me, because i really like the look of your web logs but i don’t know how to set such a well looking theme.

This post very intriguing! Keep up the excellent work!