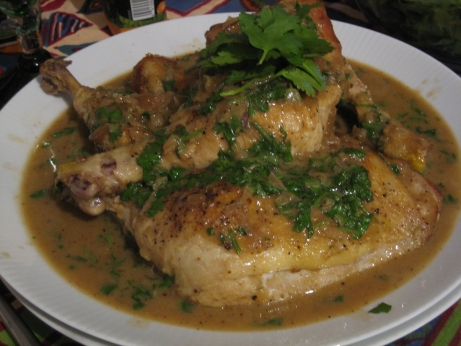 I made this dish for friends in Brooklyn. I chose it because it looked simple, and didn’t seem to call for any hard to find ingredients, so I was fairly confident I could make it in an unfamiliar kitchen. Unfortunately I struck out looking for whole mustard and coriander seeds at the mega mart. I’m sure I was within a six block radius of some really great food shops, but I had no clue where they were. If I’d thought ahead I would have picked things up at Zabar’s that morning, but I didn’t so I had to make do with powdered mustard, and ground coriander. That meant that amounts I used were guesswork, and the texture of the sauce was quite different from the intended result. Powdered mustard can’t hold a candle to the flavour of whole mustard seed either.

In this dish the chicken legs are browned, and the sauce / poaching liquid of shallots, wine, water, and the seeds is built in the pan. The chicken is added back in and cooked through, then apple jelly and fresh cilantro are whisked into the sauce. The jelly did a good job of balancing the bitter / sour flavours of the mustard and coriander, but the sauce could have been thickened or reduced before serving.

My main issue with the recipe was the chicken skin. The legs are well browned and the skin contributes flavour, but then they’re poached and the lovely crispy skin gets water logged and washed out. I didn’t find the skin very appealing in the final dish, and I think if I were to make it again I’d remove the skin before browning. If the final texture of the skin is unappetizing, and all it’s doing is adding fat to the dish, why not remove it?

Overall, it was simple to prepare, and relied on easy to find ingredients and pantry staples (despite my particular issues). The flavours in the sauce worked really well together, and they penetrated the chicken during the poaching. Using skinless legs, and thickening the sauce would have made a world of difference. Using whole seeds instead of ground would have been even better. In the end it was good but not spectacular, some of that was my fault, and some of it was The Book’s.