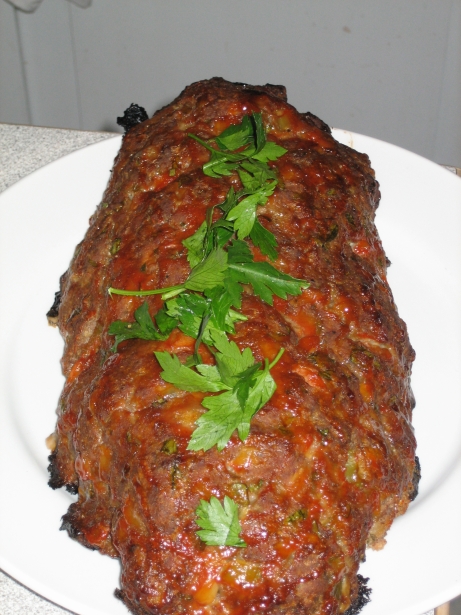 Take cover! NORAD has detected an extraterrestrial turd loaf coming in fast over the arctic. It wants our Humpback whales to save the future.

This was not the most visually appealing dish I’ve ever made, but it did taste good. I think it’s um, distinctive, shape helped with the flavour too. I’ve made meatloaf in a loaf pan before, and while it’s geometry is soothing, there isn’t all that much surface area exposed to direct heat. This loaf developed an excellent crunchy crust which really made the dish. The secret to the crispy crust was a healthy slathering of ketchup before it went into the oven.

I’m quite proud of The Book for using ketchup here. They didn’t seem to feel bad about it, or tell me that I really should be making my own, or ordering heirloom tomato preserves off the internet. They recommended plain-old funding-John-Kerry’s-political-career ketchup. Maybe this was The Book’s attempt to show that they’re in touch with the common man? who knowns? But I appreciate it.

This is a classic meat loaf recipe that doesn’t deviate or experiment too much. There are a couple of nice touches, but generally it’s straight up memories of childhood comfort food. It starts with a sweat of onions, garlic, celery, carrot, and scallions (one of the slight deviations from the textbook). Then ground beef, pork, breadcrumbs, eggs, and parsley are lightly mixed together and shaped into the giant worm of Arrakis. It’s then covered in ketchup, and baked through.

The book recommends having the butcher coarsely grind beef chuck, and pork tenderloins for this recipe, instead of using the finely textured twice-ground meat that’s available pre-packaged. It wasn’t a command from on high, so I just bought the stuff in the display case. I now see that The Book was right and I was wrong. The flavours in the meatloaf were excellent, its main problem was the texture. It was too tightly packed and dense. Using more coarsely ground meat would almost certainly have taken care of the textural issues, and made this an even better loaf.

My dining companion and I occasionally like to have cook-offs. Kind of like Iron Chef in the privacy of our own home. This dish was my entry for battle meatloaf, and I’m happy to say that it swept the judges votes. Her entry won top marks for presentation and style, but it just couldn’t compete on seasoning and depth of flavour. I’ll have to write the Heinz company to thank them.

I’d like to give your dining companions dish 4.5 mushrooms out of 5. Marks for humility, of course.

Funniest entry ever. But after watching a movie where the main guy has to literally eat shit… the picture isn’t that appetizing.

How generous of you Al. And for the record, let it be known that I did win the schnitzel-off (according to me anyways). Just because KC’s cooking adventures are “for the book project,” it doesn’t make them any more valid than my culinary contributions. I am tired of being relegated to salad duty.

Damn mvb, you actually WANT to cook? You guys really are made for each other. It must be culinary shangri-la over at casa mvb/kck.