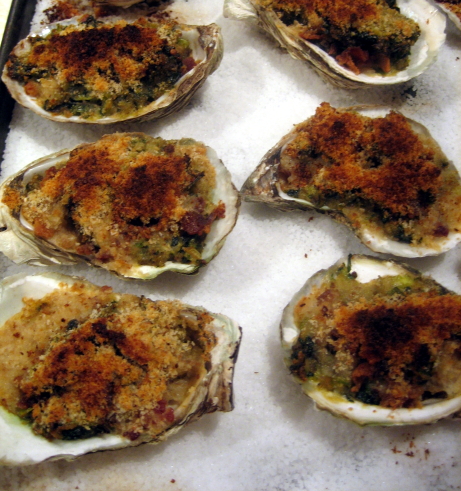 This recipe from Epicurious is similar to The Book’s version, but the linked recipe has slightly different proportions, and makes twice as much topping. I didn’t read the recipe very thoroughly, and used little Malpeque oysters for the recipe, instead of the “large” oysters the recipe called for, so I had more than enough topping.

We used to get Oysters Rockefeller about once a year as children. My parents would pick up a case of Oysters for themselves, or get a few cases and invite friends over for an oyster party. Us kids were totally grossed out by raw oysters, and dared one another to try slurping them. Inevitably one of us would take the bet, and then gag on the slippery salty oyster, and spit it into the sink. My parents quickly realized this game was a waste of precious oysters, and started making Oysters Rockefeller for us, which we devoured. As I grew up I came around on the raw oyster, and ended up preferring them raw with just a little squeeze of lemon juice, or a dash of hot sauce.

During my late teens and early twenties I was a volunteer firefighter, and our department had an oyster and beer bash every fall. Mostly people came to the party to shuck and slurp raw oysters at long tables all night long, but we prepared oyster soup and oysters Rockefeller too. I would spend the afternoon shucking oysters and saving the prettiest shells. I never got the department’s recipe, but they did an especially fine version of the oyster Rockefeller. Even though I prefer my oysters without adulterations, I certainly wouldn’t say no to one.

Unfortunately this recipe doesn’t live up to either my Mother’s or the department’s version. Using the wrong oysters threw the whole recipe out of whack, but I don’t think that’s the whole story. You start by making a mixture of chopped Boston lettuce, baby spinach, scallions, parsley, celery, garlic, and bread crumbs. You then wilt this mixture in a skillet with butter, and add Pernod, anchovy paste, cayenne, salt, and pepper. The mixture is allowed to cool, while you crisp and crumble some bacon. You then add an oyster and some of it’s liquor to a cleaned oyster shell, top with some of the vegetable mixture, bacon, and more bread crumbs. The oysters then get stabilized on a bed of salt crystals, and go into a 450 oven for 16 – 18 minutes.

My main criticism of the recipe is that there were way too many bread crumbs. The crumbs soaked up all of the oyster liquor, and overwhelmed the oysters with their sandy texture. Even if I’d used gigantic Pacific oysters that would have been a problem. Using the smaller oysters also meant that they were overcooked and dry by the time the the tops were browned. Unfortunately my little oysters got completely lost under a mountain of spinach and bread crumbs. I could almost detect a hint of the sea in this dish, and I thought I found the oyster in a couple of them, but it could have been a clump of bread crumbs. Given the excess of topping, I was surprised at the lack of bacon, you could easily have doubled it without going overboard.

Done right, oysters Rockefeller have a just barely set oyster, with a good deal of liquor left at the bottom, and a flavourful crunchy topping. They can compliment and accentuate the oyster, leaving it as the star of the show. My oysters were, dry, didn’t taste like oysters, and didn’t even try to compensate with bacon. It’s hard to give the recipe a fair rating, because I messed things up. I’m sure that the topping had too little bacon, and too many bread crumbs, I would have liked the anise flavour of the Pernod to come through a little more clearly as well. My final product didn’t taste too bad, but I would have saved an hour, and enjoyed myself more if I’d just slurped the oysters raw.