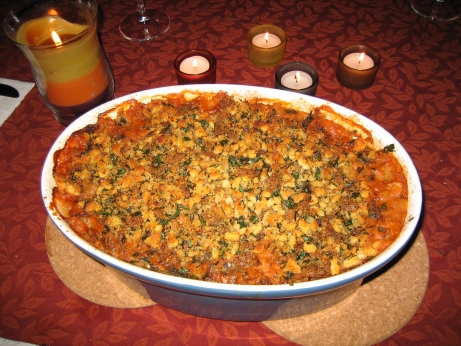 Easy indeed. I’ve made both of the cassoulet recipes in the book now. This is the easy version which can be prepared in 4 hours, plus soaking time for beans. The more authentic version takes 2 days. Both were delicious, and the differences between them were pretty subtle. It’s nice to know that you can get pretty much the full effect of the dish in 1/12th the time.

In more traditional versions lots of effort goes into getting flavour into the beans. They’re soaked then simmered with aromatics, meats, and browned bones then allowed to sit overnight. All of this works to pack as much taste into the beans as possible. It’s a bit of pain, but it does get the flavours in there. In contrast, this recipe soaks the beans without any added flavouring, then quickly simmers them a bouquet garni, tomato paste, and garlic. The beans are not quite as tasty, but still delicious. In this version browned sausage and shredded duck confit are added to the beans. The dish is then covered with a garlic laden topping which uses the duck fat to make make cracklings, and toast bread crumbs. Then the whole things goes into a 350 degree oven until it’s bubbling merrily.

In this versions the beans are not even close to being the star of the show. They’re functional, they soak up a lot of the other flavours, but they’re more or less just there. In the more elaborate version from The Book the beans were a much more central player. The quality of the duck confit and sausage is what will make or break the dish for you. Spare no expense, and travel great distances to find a really good cooked garlic pork sausage. As far as I know the best garlic Keilbasa in Montreal is to be found at Euro Deli (St. Viateur and St. Urbain next to the church). I picked up the duck legs at a little butcher shop on Van Horne (Boucherie France – Canada, 1142 rue Van Horne). She does a brisk business in duck confit, and cassoulet. You can also go enjoy the selection of Nicole Kidman photos she has taped to her fridge. As long as the duck and sausage are up to snuff this will be a no fail recipe.

The bread-crumb topping is hugely flavourful, and was everyone’s favorite part. The cracklings are made by tearing the duck skin into strips and then cooking it with any duck fat that was scraped off the legs. My cracklings never really crisped up, but they were still completely delicious. The bread crumbs toasted in duck fat are absolutely out of this world. Your cardiologist will hate me for recommending this to you, but the topping absolutely made the dish. Because the bread crumbs are so central to the dish, it would be nice to use a top quality baguette if at all possible.

The duck is torn into chunks in this recipe. Frequently the duck legs are left whole and then served on top of the beans, which makes for a dramatic presentation. The tearing strategy worked out well though, more surface area = more delectable duck flavour permeating the casserole.

I served this cassoulet to my brother and his girlfriend. Everyone really enjoyed themselves and the dish. It was rich, hearty, and satisfying. I liked that this version managed to simplify a classic without asking for unreasonable compromises in taste. I think a lot of people avoid making cassoulet at home because it requires so many obscure ingredients, and a fair bit of planning. This version makes it much more accessible, and still results in a delicious dish. 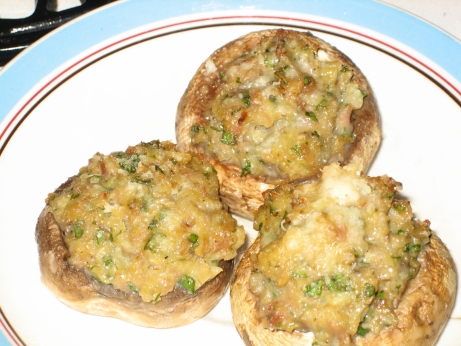 No recipe, too bad.

These were an excellent appetizer. I brought them to a dinner party and they disappeared just like that. They’re mushroom caps stuffed with the cooked down mushroom stems, garlic, onion, bread crumbs, prosciutto, Parmesan, a useless dash of parsley, and an egg to hold it together. After the caps are filled they’re sprinkled with a bit more cheese, and drizzled with olive oil. Then they go into a 400 degree oven for 20 minutes.

The mushrooms just cook through, and the filling melts into the gills making the whole things creamy and delicious. The prosciutto and Parmesan add wonderful flavours of their own, as well as a good bit of salt which helps release the essence of the mushrooms. In theory the parsley is there to add some colour to the filling, but I didn’t find it very appealing. There is a lot of liquid in mushrooms, and the bread crumbs were there to soak it up. The 1/4 cup crumbs for 24 mushrooms the recipe recommends was a little on the low side. They could have stood to be dried out a bit.

This recipe worked really well, it was easy to do most of the prep at home, and then finish off the final assembly and baking at a friends place. I love appetizers that can be easily transported, either finished, or mostly finished. Almost inevitably you will be asked to bring things to a party more often than you’ll host a party of your own, so ease of transport is a key criterion in looking for a good hors d’oeuvre.

The filling would work equally well in little vol-au-vent, but stuffing the caps really emphasizes the mushroom flavour, and makes them more fun to eat. The balance of flavours was spot on here, the mushrooms were front and centre, with the prosciutto and Parmesan acting as capable supporting players. This recipe is a mycophobe’s worst nightmare, but a good trick to have up your sleeve if you’re asked to bring a little something to the party.