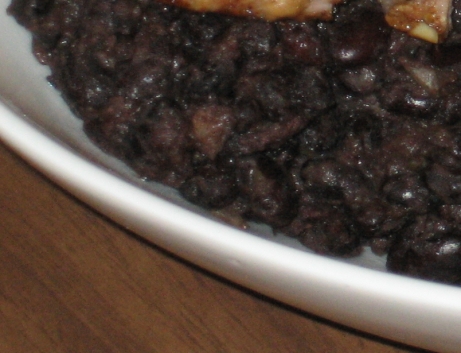 These beans were fine, completely middle of the road fine. They’re pretty standard soaked black beans with a bit of bacon, green pepper, cider vinegar, and a bay leaf added. The effect of these added flavours was very subtle, so subtle you might not notice them at all. I tried them again a couple of days later, and the flavours were a bit more pronounced, but they could still slip under the radar.

That said, beans aren’t really meant to be the star of the show most of the time, and these were a perfectly good accompaniment to the pork tenderloin I served them with. They had a fairly good texture, with a bit of resistance left to them. Some of the beans broke down and thickened the cooking liquid. They might have been better if they ended up with a little more liquid, but I didn’t want to add water right at the end.

I know nothing about Cuban food, but I certainly wouldn’t have guessed Cuban if you’d asked me to guess the origin of the recipe. There aren’t a heck of a lot of Cuban restaurants around here, so I don’t have an opportunity to compare this to any gold standard. If you’re looking for a straightforward black bean recipe that won’t get in the way of anything else you’re serving you could certainly do much worse than these beans. I wouldn’t expect anyone to write home about them though. 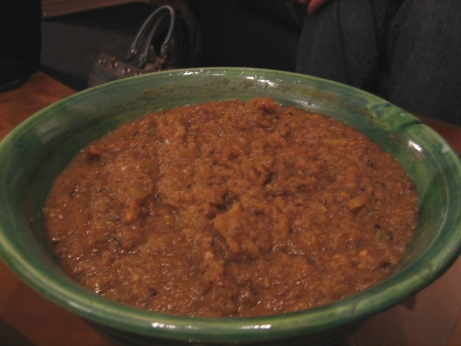 No recipe this time, but honestly you’re not missing all that much.

I think this came out to be less than the sum of it’s parts. Essentially it’s broiled eggplant, sweated onions, garlic, and green pepper mixed with fresh tomatoes, lemon juice, sugar, salt, and pepper. All good stuff up to this point, but it all went for a spin in the food processor, and came out a mushy unappealing terra cotta.

The idea is to chill this for a few hours and then serve it with crackers or baguette. In this regard the texture was way off, it had tiny chunks in a soupy liquid destined to slip and slide. Its texture was wrong in the same way that store bought salsa can be wrong. If it had been completely smooth and thickened it could have worked well, if it had been left chunkier with something to bite into it might have been nice. As it was all the ingredients lost their individual identities, but didn’t really meld into a flavour partnership. Bland, watery, and ugly was the take home message of this dish. I had 12 hungry people in my living room devouring anything put in front of them, but there was plenty of this left at the end of the evening.

A day or two later I cooked down some the remainder and used it as a pizza sauce. It worked remarkably well in that incarnation. Eggplant, tomato, and onions all have a lot of water in them, I think the water either had to be left in the cell structure of the vegetables, or cooked out. Food processing it just left is soupy and uninspiring.