The Book has got quite a few recipes that follow the [bitter green] + [cured pork] + [some acid] = [delicious] formula. In this case the bitter green is played by kale, cured pork by our perenial favourite: bacon, and cider vinegar is taking on the role of acid. You simmer the kale for a few minutes while crisping the bacon in a pan. After pouring off most of the bacon fat, you add the drained kale to the bacon, and sautÃ©e for a couple of minutes. Once it’s off the heat it gets a quick spash of cider vinegar, and it’s time to eat.

The Good: We eat a lot of bitter greens, and this variation on the theme is one of the better ones. Kale is particularly nice because it retains a lovely bright colour even when it’s cooked. The bacons smokey sweet and salty fattiness plays perfectly witht the bitter turnipy kale. The sweetness and acidity of the cider vinegar tie it all together nicely. This dish takes about seven minutes to make, and it tastes wonderful.

The Bad: There’s not much bad to say about such a classic combination. It works. Bitter green haters have aready stopped reading this post, so no need to pander to them. The only reservation I’d have about serving this is if the other items on the menu were very mildly flavoured. This dish packs a big punch, so pair food accordingly.

The Verdict: This is a winner. We eat some varition on this formula frequently. Our doctors tell us to eat more bitter greens, and this makes doing so a pleasure. Sure, it involves bacon, but it’s mostly used as a flavouring agent. You don’t need to add salt, because it’s right there in your bacon, oil? nope also brought to you by the joy of bacon. This simple unfussy standby dish, and the many others like it, have a special place in my heart. 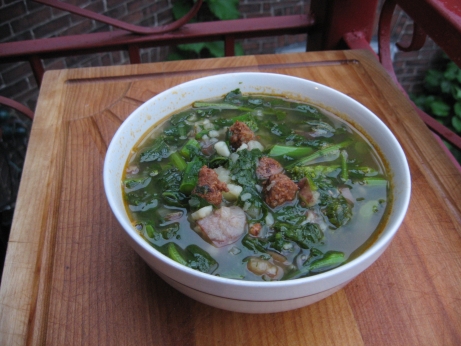 The recipe on epicurious calls this Tuscan kale soup. Tuscany and Portugal aren’t next door to one another, and their food traditions aren’t all that similar, but I’m willing to forgive The Book. In exchange I’ll ask you to forgive me for not using kale at all. Normally my grocery store is overflowing with kale to be bought up by chic urban moms, who only wear clothes by designers who don’t go past size four. This season’s infatuation with the skinny jean must have caused a run on kale, and left none for me. I had my heart set on this soup, and decided I didn’t feel bad at all about subbing in rapini. They’re not particularly close cousins in the plant world, but they’re both bitter greens, and both great in soup.

I still can’t get over how delicious this soup was. There’s absolutely nothing to it, you start by softening some onions in olive oil, then add sliced potatoes and cook for a few minutes. Water is added, and the potatoes are left to cook. Meanwhile the chorizo is browned up in a pan. When the potatoes are done they’re mashed a bit, and the chorizo and “kale” are added in. It’s left to cook for a few more minutes, and that’s it. A huge amount of the flavour comes from the chorizo, so make sure to buy the good stuff.

Montreal has a thriving Portuguese community, and the chouriÃ§o sausage that is traditionally used in this dish is practically easier to find than the Spanish chorizo. I had to go out of my way to get the non-traditional ingredient, which The Book called for in an attempt to make my life easier. Sometimes this project is weird.

The flavours here were just perfect, with the rapini and sausage dominating. The spiciness and richness of the chorizo contrasted with the clean bitter flavours of the rapini. The potatoes thickened the soup and added a lovely earthy undertone. It was a very restrained dish, with clean individual flavours that just worked. I ate a gigantic bowl without stopping to breathe, and went back for seconds. I’m not normally a huge soup person, but I can’t wait to make this one again.