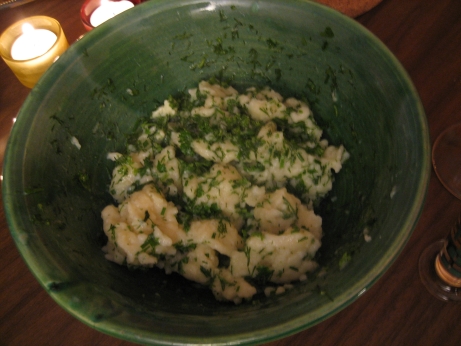 This recipe was a bit of a disaster. As disaster’s go it tasted quite good, but the result bore little resemblance to the recipe description. The Book says

“The tiny drop-style German dumplings called spaetzle are juged by their lightness, and these practically take flight”

My efforts yielded large, dense, and doughy dumplings that no German would have recognized even as a failed attempt at spaetzle. The recipe is fairly simple, a dough of flour, salt, eggs, and milk is lightly brought together. Then the dough is worked through the holes of a colander over a pot of simmering salted water, and the resulting dumplings are boiled for 5 minutes, then tossed with butter, chives, parsley, dill, salt and pepper.

The herb butter was a wonderful compliment to the dumplings, in fact the butter pretty much made the dish. I prepared this during the winter, and I really appreciated having my kitchen perfumed by the herbs as they were tossed with the hot dumplings.

I’m really unsure what went wrong with this recipe, but it just didn’t make any sense the way it was. Maybe the problem was in the shape of my colander? maybe I was supposed to hold the colander mid-air while I pushed the dumplings through? But that seems incredibly awkward. Piping the dumplings into the water would work, but it might be a bit slow. There is such a thing as a spaetzle maker, which I can only presume would do a better job. The poor man’s spaetzle maker suggested here isn’t an adequate substitute.