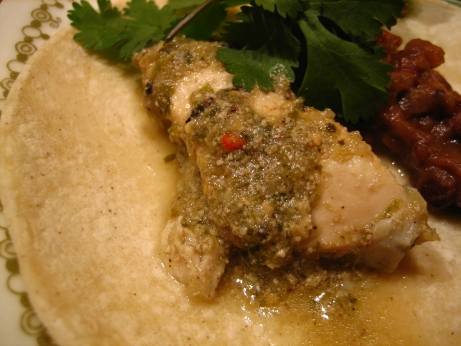 I had a very mixed reaction to this dish. I made it for friends along with some of the other recipes listed under Mexican in the index. It makes a good deal of food, and we weren’t able to eat it all. On the night of the party I had the chicken and decided it was delicious, I had some leftovers the next day and decided they were gross and that I’d never liked it in the first place. Some time passed and my memories softened, I recalled the chicken fondly again but with a queezy uncertainty. I’d frozen some of it, so I pulled it out when I saw it was time to write the dish up. The verdict? slightly freezer burned. In the end I think there were some really strong elements to the dish, and some fairly weak ones.

A chicken is divided into serving size pieces, and simmered with garlic, onion, cilantro, salt, pepper, and allspice. The chicken is then topped with a sauce of toasted pumpkin seeds, cumin, allspice, cloves, pepper, tomatillos, serranos, onion, garlic, cilantro, salt, and a poblano. The whole thing is then baked and served.

The sauce has some excellent flavours, I really liked everything that went into it, and the combined beautifully. The flavours were really complex, but cohesive. There are a huge number of flavourful ingredients in this sauce, and marshaling their forces this deftly isn’t easy. The sauce’s flavour was the strong point of the dish, It’s texture and appearance were pretty much awful. A light beigey-green sauce over some beige chicken didn’t do much for visual impact. The pumpkin seeds and spices are ground to a powder before being added to the sauce, and the sauce is pureed thoroughly, but it still ended up mealy and unpleasant. I think I just don’t like the texture of ground nuts or seeds in sauces. Maybe passing this sauce through a Chinoise would have improved it, but I don’t have one, and the recipe didn’t call for it.

The chicken itself was a bit of letdown. It’s topped with a flavour packed sauce, but the meat is absolutely bland. It simmers in a broth for ~50 minutes, picking up flavour from the arromatics you added. Unfortunately the chicken flavour is escaping to the liquid at the same time. 3 1/2 cups of the liquid get added into the pumpkin seed sauce, but the other ~3 quarts went into the freezer. The Mexican inspired chicken stock was a nice little bonus from making this dish, but you wouldn’t’ serve your guests chicken you’d used to make stock with first, so why do it here? In the end you have an exhausted chicken covered with gooey boiled skin, yum.

I should emphasize that the sauce for this chicken was really delicious, everything else about the dish is wrong wrong wrong, but it’s almost good enough to make up for it. If I were to make it again I’d grill the chicken instead of boiling it, grind the pumpkin seed mixture into a nano-scale powder, puree the sauce obsessively, then pass it through a hepa filter.