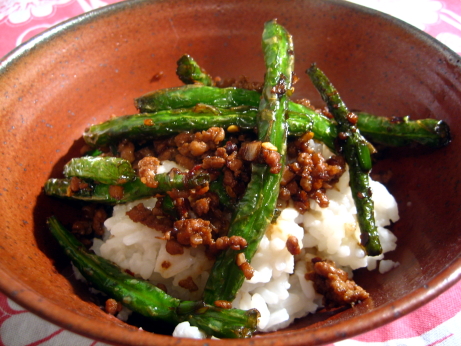 I couldn’t find a recipe for this one online.

I was in a frying mood the night I made these beans and the onion rings. The combination of a fried appetizer, and a fried main course was just a little too much. This stir fry was more than greasy enough all by itself.

In this dish trimmed green beans are deep fried in a wok for 30 seconds, then drained. You then drain off most of the oil, and build a stir fry starting with garlic, red pepper flakes, and ginger, then add ground pork. Once the pork is browned the beans go back in to reheat. A mixture of sugar, salt, soy sauce, sake, and sesame oil is then poured over top along with a handful of scallion greens and stirred to coat. Put this on a bed of sticky rice and you’ve got dinner.

The stir fry itself was totally delicious, it was an excellent balance of ingredients, just spicy enough, and wonderfully complex and arromatic. However, the stir fried beans were a bit weird and greasy. I trimmed the ends of the beans, so there was an open tube down the middle of them. Some of those tubes filled with oil during frying, and made the dish much greasier than I would have liked. It’s possible that my oil temperature dropped too far, and the pressure of escaping steam wasn’t enough to keep the oil out. If so, more oil, or smaller batches of beans would have taken care of the problem. The recipe says that the point of the deep frying is to lock in the coulour of the beans, but blanching, and shocking them would have done the same thing. The exterior of the beans took on a funny wrinkled texture, but they remained firm and crisp, and nicely green.

I’d happily make an adapted version of this recipe, but I think the deep fried green beans are better left behind. There are lots of recipes for dry-cooked beans out there, so I’ll presume it’s a well respected technique, and suggesting that they kind of suck is probably insulting someone’s Grandmother’s cooking, but they just weren’t my bag. The rest of the dish was excellent, and simply replacing the frying for a blanching would probably solve my only criticism of the recipe. If it had been less oily, it would have earned 4.5 mushrooms, but as it is, I can’t give it more than three.