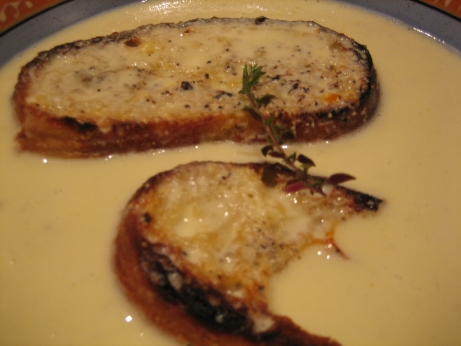 This is an Italian soup called aquacotta or “cooked water”, because it comes together from nothing special. It starts with a garlic broth (water, garlic, thyme, bay leaf, and salt) which is forced through a sieve, and slowly added to a mixture of egg yolks, parmigiano-reggiano, and olive oil. Add pepper, and spoon it over some chunks of country style bread. I wanted to make it more of a meal so I browned some cheddar on the bread under the broiler and added it to the soup.

This recipe really appealed to me because I’d invited a friend over for supper, but when I got home from work I just couldn’t face going to the grocery store. I loved that it didn’t require anything I didn’t have on hand, and that it hardly took any effort. The garlic broth worked out really well, giving the soup a pungent flavour, without the same old same old of chicken stock.

The egg yolks gave the soup a bunch of body. The recipe says only to stir the hot broth into the egg mixture slowly, but it would probably be a good idea to take the time to temper the mixture before you start adding in a stream. Coagulating your yolks wouldn’t be good news for anyone.

Most of the saltiness came from the cheese, which was nice. Not too many soups call for cheese in such a nice proportion. I appreciated that the cheese was a nice flavouring agent, without being the star. My cheddar topped toasts didn’t work too well as a replacement for the bread chunks. They floated to the top, and ended up looking a bit sickly. Also one of the best things about cheese on toast is the contrast between the gooey cheese, and the crisp toast. That’s obviously a non-starter when your toast is floating in soup. I wish I’d just stuck to the recipe as it was, or served them on the side.

Overall I liked this one, it was simple, flavourful, economical, and not much fuss.