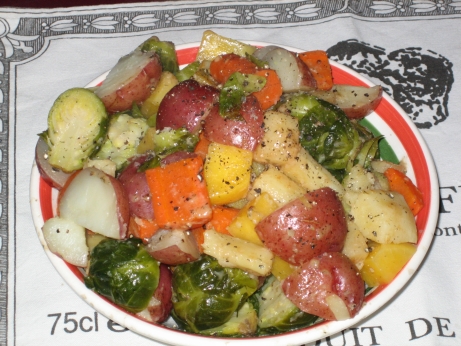 This version of the recipe makes three times as much as The Book’s, and recommends steaming the veggies for two thirds of the time.

Parsnips, turnips, and Brussels sprouts, horseradish, and dill all in one recipe? My goodness gracious, it’s almost too good to be true. The parsnips, turnips and Brussels sprouts are steamed together, while potatoes and carrots are steamed in another pot. Then everything is tossed with a horseradish dill butter augmented with a hit of cider vinegar.

I admit I cheated a bit and cooked the veggies wrapped in tin foil on the grill, but steaming is steaming right? The biggest trick with the recipe is to get all the veggies to be done at the same moment. For example, by the time my potatoes were finished, the carrots were overdone, and while the Brussels sprouts were still crisp, the turnip was a bit mushy. This is probably my fault, I don’t think I followed the recipe very precisely when it came to cutting the veggies. For example, the carrots are to be cut diagonally into 1 inch long pieces, but the parsnips were supposed to be 2 by 1 inch sticks. They’re pretty much the same shape, so I cut them into pretty much the same size chunks. The nice people at Gourmet spent quite some time experimenting with different vegetable geometries to get this right, I’d recommend taking their advice and not going it alone.

This recipe stars often overlooked and under appreciated winter vegetables, presents them beautifully, and plays up their fundamental bitter nature. I love that the recipe resists the temptation to sweeten, or add cream. The carrots and potatoes keep this from being too bitter, all the while celebrating the joys of roots. The horseradish boldly adds a tangy punch of heat, in fact I could have happily added more. The use of dill makes me think of the dish as Eastern European, and brings romantic notions of hearty Ukrainian farm families fending off the winter’s chill to my mind.

I really enjoyed the flavours and concepts here, but the execution was a bit trickier than the recipe led me to believe. 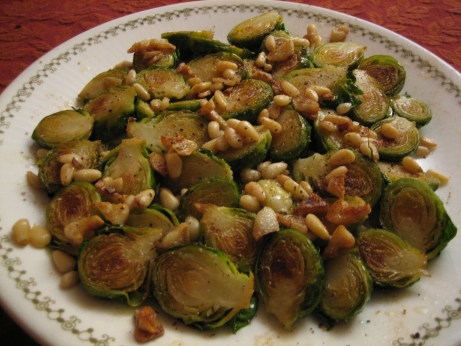 A while back I mentioned that I’d think about opening a restaurant that specializes in helping adults overcome their childhood food traumas. Brussels sprouts will feature prominently on the menu. This preparation is the perfect reintroduction to this maligned vegetable. Boiled or steamed they can be fairly one-note bitter, and overcooked they have that sulfurous stink that’s so common in foods kids hate. Here they’re prepared simply with garlic and pine nuts in a bit of butter and olive oil. The garlic, and the nutty flavours of the browned butter, and pine nuts compliment the sprouts beautifully. The presentation is dramatic and very attractive, and the sprouts end up crisp, lively, and just cooked through. My dining companion and I made twice as much as we thought we’d eat, but polished the whole plate off.

I liked these so much I made them for the boys on one of our weekend getaways. That experience emphasized how important a heavy bottomed pan, and careful heat management are to getting this recipe right. Using a flimsy non sitck, on an unfamiliar stove I managed to leave half of them mostly raw on the inside, the other half overdone and all of them unappealingly blackened on the bottom.

That said this is still far and away my favorite Brussels sprouts preparation. As long as you can maintain low even heat the sprouts get caramelized on the bottoms, and perfectly cooked though. This recipe is ideally balanced; it manages to show off everything that is great about Brussels sprouts, and deftly avoids their weaknesses.