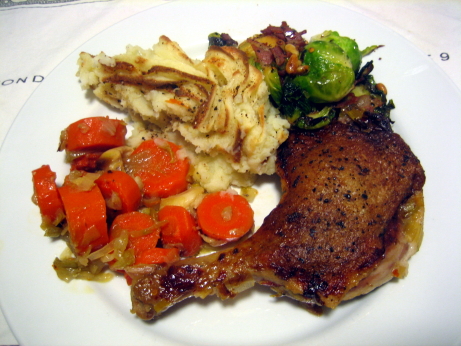 The recipe is from Fergus “Nose To Tail” Henderson’s London restaurant, St. John.

My dining companion and I adore duck, and eat it often, so a new preparation is always exciting for us. I really like the thinking behind this recipe. It takes an underused part of the duck, and brings out its absolute best. Incidentally duck legs are a wonderful bargain, they’re exceedingly flavorful and they’re nicely inexpensive. Duck breasts and fattened livers are worth their weight in gold, but that means that there are a lot of legs hanging around, and there’s only so much demand for duck confit. There’s loads of duck produced in Quebec, so it’s always easy to find.

In this recipe duck legs are trimmed of excess fat, and that fat is rendered in a skillet. The legs are seasoned with salt and pepper, and browned in batches. Most of the fat is then discarded from the skillet and a mixture of chopped leeks, onions, and garlic are softened. A truckload of sliced carrots are then added to the pan and cooked for a few minutes. The veg is then seasoned with salt and pepper, and spread in the bottom of a roasting pan. A bouquet garni of parsley, rosemary, and bay leaves is added to the veg, along with a jalapeÃ±o. The duck breasts are then nestled on top of the carrots, and chicken stock is added until it covers most of the legs, but the skin is left exposed to the direct heat of the oven. The dish is then baked at 400 for an hour and half-ish. The duck and carrots are served with the defatted juices on the side.

I was really pleased with what this preparation did for the duck. The meat was falling off the bone tender, and perfectly braised, while the all important skin was cracklingly crisp. The meat gave up some of its goodness to the surrounding liquid, but it has flavour to spare, and it benefited from the arromatic infusion. I would happily eat this duck again and again, but I’d leave the carrots off the plate. Carrots braised for an hour and a half are well in to mushy territory, and there were a lot of them. Everyone at dinner was going back for seconds on the potatoes and Brussels sprouts, but the bowl of carrots was mostly ignored. It actually tasted pretty good, but the texture was just not appealing. I’d leave the carrots in the kitchen when you make this, and turn them into the basis for a lovely carrot soup the next day. The duck legs, and accompanying pan juices were an excellent centerpiece to the meal, and the carrots were a worthy sacrifice, in this case the good of the many outweighs the good of the few, or the one.

I liked this dish on a lot of levels, first off, the flavour was fantastic, the duck meat was heightened by the arromatic infusion, and the skin had the almost but not quite too rich quality of bacon. The meat was fork tender, and the skin perfectly crisp. I also loved the concept here, it’s a really simple and smart way to bring out the best of duck, with tender meat and crispy skin, all in one go. If the vegetables had been less done, it would have been a conceptual trifecta, and a perfect little symbiotic ecosystem. As it was I wasn’t quite sure what to do with fourteen carrots and two leeks worth of mush, and I didn’t think of making soup at the time. I turned some of it into a middling pasta sauce. As a standalone the duck and pan juices would earn about 4.5 mushrooms, but the carrots are dragging the rating for the whole dish down. 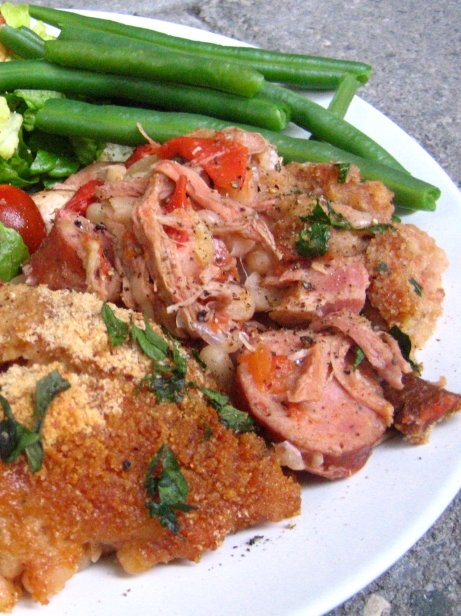 This is The Book’s definitive and official cassoulet recipe. I wrote about the Easy Cassoulet recipe a couple of months ago, which skipped steps and cut corners, but still resulted in a very delicious dinner. This adaptation of Julia’s from Mastering the Art of French Cooking takes two days, and goes out of it’s way to find traditional steps for you to follow.

On the first day you soak the beans. But you don’ just soak them. You bring them to a boil and let them sit for 50 minutes. Then you bring them back to a boil, with a bouquet garni, onions, salt, and pork rind you spent the preceding 50 minutes ritualistically rinsing, boiling, and slicing. Then it’s simmer and skim for the next 1 1/4 hours. The beans are then left to cool overnight.

Day one’s activities continue with the skinning, defatting, and shredding of the duck legs, the browning of mutton (I used veal) bones in a whole cup of goose fat, and the caramelizing of onions in that goose fat. The duck, the bones, the onions, and let us not forget the fat are brought to a simmer with bay leaves, stock, tomatoes, garlic, and white wine. After an hour and half on the stove it’s left to cool overnight.

Day two is fairly straightforward. You brown and slice some sausage, and remove the inedible bits from the now cold beans, and the duck mixture. Then the cassoulet is assembled in alternating layers of beans and meat, then topped with bread crumbs and parsley. The recipe calls for a 10 quart enameled cast iron pot, but the biggest one I could get my hands on was 7 3/4 quarts. I managed to get almost everything into the smaller pot, but the full sized pot would have been better. The cassoulet is brought to a simmer on the stovetop, the baked for about an hour until the juices are bubbling up through the crust.

There were a lot of steps, a lot of tricky to source ingredients, and some strange cooking instructions here. It resulted in a rather delicious cassoulet though. I cheated in more than a few places, and messed up in a few others, so I’m not sure the dish came out exactly as it did in The Book’s test kitchens. For the record I had a mix up with the bouquet garni and ended up putting in 15 cloves instead of 5, which really changed the flavour of the beans. I didn’t peel the tomatoes, because I hate peeling tomatoes and I don’t find it’s really worth the effort. I didn’t make beef stock, and I did used the specifically forbidden canned variety. I used a cured garlic kielbasa instead of the fresh garlic sausage called for. I also couldn’t stand the idea of serving the dish with all that goose fat in there, so I removed most of the fat that floated to the top of the meat pot. It was still decidedly rich and fatty, but not nearly as oily as the recipe intended.

That is a long list of cheats, normally I do my best to stick to the recipe as closely as possible, but this time I just wasn’t in the cards. I made the recipe for The Boys on one of our weekend getaways, and I was cooking in an unfamiliar kitchen, with only the equipment I’d thought to bring with me (they don’t cook much, so the facilities are minimal). I couldn’t find some ingredients, some of the steps I just didn’t have time for, and there were a couple of honest mistakes thrown in for good measure. I think the final dish was pretty close to what the original intended though.

In the end the cassoulet tasted great. It was similar to the easy cassoulet, with the duck and sausage flavours predominating. However, the beans in this version were really worth all the effort. They were tender with a bit of bite left to them, and packed with flavour. Unfortunately a lot of that flavour was cloves, but the smoky bacon, and pork belly were there, with the thyme and onions adding a nice backdrop.

The breadcrumb crust was a bit of a letdown. The easy cassoulet had an amazing crust, made by turning the duck skin into cracklings, and toasting the bread crumbs in some of the duck fat and garlic. That topping was just out of this world, whereas the topping on this dish is just there to absorb some liquid. The recipe has you throw away the confit duck skin and its fat, but then add in a whole whack of goose fat. I really didn’t understand the rationale, it seems like an obvious missed opportunity.

This dish was labour intensive, and I don’t think it would have been nearly as much fun without the help of my co-chef Al. Whenever it’s time to make an excessively fatty fat fat dish, I can count on him. I should also thank the other boys for washing the seeminly endless sink-fulls of goose fat coated dishes this produced. Cassoulet is an absolute indulgence, and indulging is much more fun with friends, especially if you’ve had to work for your reward.

I feel that this recipe is one I’ll make again and again, until I get it just right. My first attempt tasted about as good as the Easy Cassoulet, but I’m sure that with practice this recipe has the potential to blow the easy version out of the water. It’s the kind of dish that people perfect and refine over lifetimes, to get just the right texture in the beans, the perfect amount of bacon flavour, the ideal thickened but still runny texture in the juices. Next time I’ll be much better prepared for some of the more obtuse steps, and counterintuitive instructions. I can see some improvements I’d like to make, but overall it was a delicious, and faithful rendition of a very classic dish.