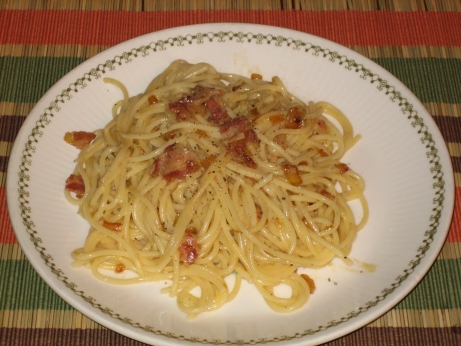 This was delicious, but then anything with this much cheese and pancetta had better be. I didn’t have the heart to go out and find guaniciale (unsmoked cured hog jowl), maybe that makes me less hard core that I should be, but the pancetta worked wonderfully. This was very easy to prepare. The fat from the pancetta is rendered, and used to brown the onions. The white wine is then added and reduced to make a sauce, the cooked spaghetti is tossed in, and a mixture of eggs, parmigiano-reggiano and pecorino romano, salt, and pepper is stirred in after the pasta is off the heat. The spaghetti partially cooks the eggs, which gives the sauce the half-thickened super smooth texture that makes Carbonara what it is.

There were two main problems with the recipe as written: water, and salt. The only liquid in here is a 1/8 cup white wine (after reducing) and the eggs. The pasta was wonderfully saucy for the first minute after it was tossed, then it got thirsty and all my sauce was gone. Adding some of the pasta water would have solved this problem, and tossing my plate with a bit of it rescued my dinner. The other issue is salt. The dish has got 5 Oz pancetta, and more than a cup of parmagiano and pecorino. The pasta is cooked in salted water, and a bit of salt is thrown in at the end for good measure. The saltiness of the meat and cheeses can vary wildly, and top producers seem to have less salt than the cheaper brands. Either the folks at Gourmet keep salt licks in their desks, or they had access to less salty ingredients than I did. It wasn’t inedible, but I woke up parched in the middle of the night.

There’s a little note at the bottom of the recipe about eating eggs that aren’t fully cooked. I suppose there is a real risk of contamination, and I’m certain that the people at The Book have lawyers to make sure notes like that get in there, but where’s the joy? As a young healthy person I get to feel invulnerable and poo poo warnings like that. I’m certainly willing to take the one in several thousand odds of food poisoning to eat less than fully cooked eggs, meats, and fish. It’s a risk I understand and am willing to take. Unfortunately it’s not a risk I’m allowed to take in a restaurant anymore. No more medium rare burgers, and maybe I’ll never get to try sous-vide. How long before hollandaise is gone (not that I’d mourn it’s passing actually)? What about a runny yolk for my toast? I worry that these things I love will just become unavailable, or I’ll have to sign a waiver to order off the “irresponsible” section of the menu. What is the world coming to? Why in my day…. grumble, grumble… snore.

Other than those little complaints, it really was a delicious dish. Despite all the cheese and pancetta, it wasn’t nearly as heavy as the Carbonara you’d get from the local Italian joint. In fact there’s no cream in here at all. The texture was also much lighter. Once I’d added a bit of water the strands of pasta were flavorful, and well coated enough not to stick, but not swaddled in the overwhelming amounts of sauce you sometimes find. With the salt and water caveats in mind this can be a great dish, the recipe as written gets slightly lower marks than what it can easily be changed to become.