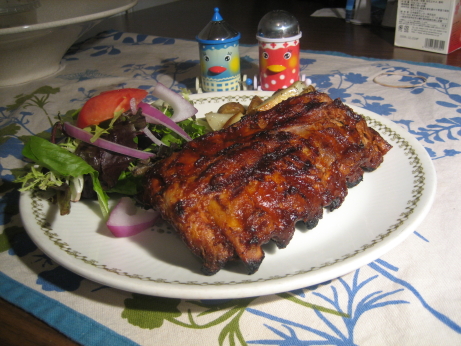 There’s no recipe for this one.

These ribs are dead simple, but they take some forethought. The ribs are simmered in water for an hour, then marinated in sauce of New Mexico chiles, ketchup, garlic, cider vinegar, brown sugar, salt, tequila, vegetable oil, ground cumin, and ground allspice for the next eight hours. Half of the sauce is used for the marinade, a quarter to baste during cooking, and the remaining quarter as a dipping sauce at the table. A little more than an hour before dinner the ribs come out of the fridge and warm to room temperature, then they’re transfered to a grill over low flame for 35 minutes. They’re basted with more of the sauce for the last 15 minutes of grilling time, then they’re rested for a few minutes, and served with the remaining sauce.

The barbecue sauce was simple and delicious. It filled its three roles admirably, it was salty enough to penetrate deeply as a marinate, sweet enough to turn to glowing caramel on the grill, and the uncooked dipping sauce’s raw edge complimented and contrasted the cooked sauce on the ribs. I was very happy to find a barbecue sauce that has a good deal of complexity, and shows some restraint with the sugar. I often find that restaurant ribs are sticky pork candy without much going on beyond slightly spiced ketchup. The bit of the tequila in the dipping sauce was a nice touch, of course bourbon wouldn’t be out of place either.

I’d make the sauce again without hesitation, and slather it on pretty much anything destined for the grill. Unfortunately I don’t think the hour-long simmer did the ribs any favours. They were wonderfully falling apart tender, but I think they gave up a lot of their flavour to the water that went down the drain. I wonder if steaming the ribs, then reducing the steaming liquid and adding it to the sauce would have brought more of the porky goodness to the plate? I preferred the texture and flavour of the meat from the Chinese-Hawaiian â€œBarbecuedâ€ Ribs where they were slowly roasted in the oven. I can’t really see why that technique wouldn’t work with this sauce, and it’s probably worth a test.

Both of those recipes use the word barbecue without actually grilling anything low and slow. I don’t really understand why The Book avoids a long grill over offset heat? Even with my gas grill with few soaked hardwood chips for smoke, I’d bet that basting the ribs with this sauce for a few hours would result in some pretty good barbecue.

I was actually happy with the way these came out, but they could have been even better. The cooking technique literally threw the baby out with the bathwater. They still tasted very nice, but it was primarily the delicious sauce that came through. The pork was there, but not nearly as prominent as it deserved to be. 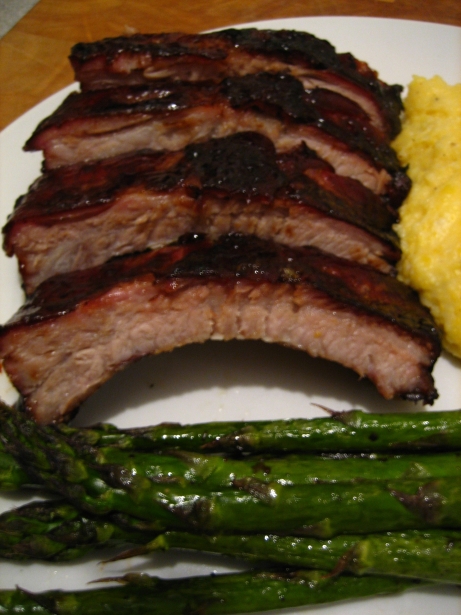