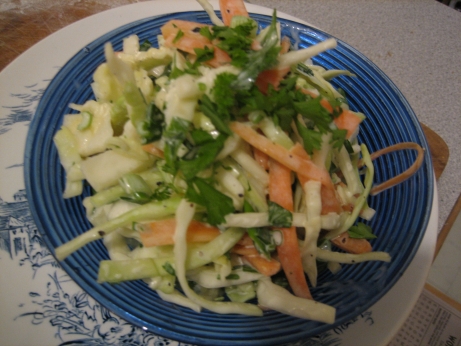 It was a very light, cooling, and fresh slaw. It wasn’t weighed down by a gallon of dressing, and the lemon flavours made the whole dish taste bright and clear. On the other hand, the cabbage retained all of it’s crispness. I like crunchy cabbage in a slaw, but this was going a little too far. My jaw hurt from the effort.

The dish is as simple as you could ask for. Whisk together a bit of sour cream, mayo, lemon zest and juice, water, sugar, salt, and pepper. Stir in sliced cabbage, grated carrots, scallions, and parsley. Let the whole thing sit in the fridge for an hour and serve. The hour in the fridge is supposed to give the sugar and salt in the dressing time to draw moisture out of the veg and wilt them a bit. But, after an hour the cabbage was just a tough as ever.

I sliced my cabbage as thinly as I could with a chef’s knife, and ended up with good looking pieces of cabbage. Maybe I sliced it too thickly for the one hour to be sufficient. If I’d used a mandolin to get narrower slices things might have worked out better. Alternately more time would have done the trick. I had some leftovers the next day for lunch and the texture was much better. Some of the freshness of the lemon had faded, but the whole salad had mellowed, and the cabbage still had a crisp bite without causing jaw cramps.

There were a lot of things to like about this slaw, but it needs some refinements. If I were to make it again I’d toss the dressing on to the sliced cabbage the night before, then add the carrots, scallions, parsley and a little refreshing squeeze of lemon an hour before I wanted to serve it. The flavours are really clean, but a bit unidimensional. If I were to make it again I’d add some sliced fennel into the mix. I really appreciated that the recipe allowed the cabbage to be front and centre. So many slaws are downed with goopy dressings in an attempt to hide the fact that you might be eating cabbage, so this was a refreshing change.