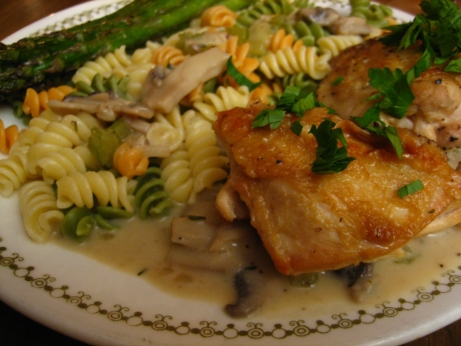 No recipe this time.

This was a fairly successful and simple recipe. It’s real comfort food, chicken in a creamy mushroom sauce served with noodles. Like most comfort food it’s fatty and a bit bland. The preparation was as simple as you could wish for. Break a chicken down into serving size pieces, and brown them in a skillet. Remove the chicken and make a sauce of onion, celery, garlic, thyme, mushrooms, and chicken stock. The chicken is added back in and simmered ’till it’s cooked through. Then the remaining sauce is bolstered with heavy cream and an egg yolk.

I often complain about chicken skin and wet cooking methods. The skin tends to turn into a gross mush. In my opinion there’s no point in eating the added fat of chicken skin unless it’s crispy. This is a wet cooking method, but the skin managed to retain at least a bit of texture, and loads of flavour. The chicken parts are simmered in the sauce, but only the bottom halves are covered. The skin gets steamed, but not bathed in liquid, so the caramelization you built stays in one place.

The sauce worked really well on the pasta. The sauce actually had more chicken flavour than the chicken did, and the cream and egg yolk gave it a really silken texture which coated the noodles perfectly. I ate some of the chicken, but the dish was really all about the pasta and sauce for me. The thyme and mushroom flavours were prominent, fortunately that’s a great flavour combination. I found the first few bites bland, but the addition of a good dose of fresh ground black pepper picked things up quite a bit. I sprinkled Parmesan on some leftover noodles the next day and they were even better.

This dish had very straightforward flavours, it hit all the marks of a crowd pleaser. It has the added advantage of not containing anything people really object to (except celery, but that’s just me). It tasted good, but it wasn’t really inspired, or particularly interesting. I guess you can’t have it both ways. I would have preferred something a little more novel. Combining loads of carbs, a healthy dose of fat, the unobjectionable flavour of chicken, and some pantry staple spices is a no brainer. This dish would fit in well on a family restaurant’s menu. This kind of comfort food isn’t actually the stuff I crave after a bad day, but TV tells me this is what people want when they’re upset. It tasted good, but it wasn’t really memorable.