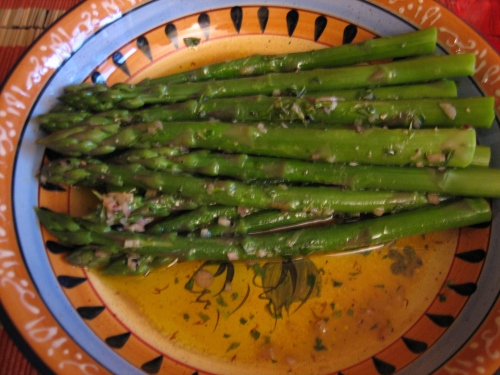 This turned out quite well. I served it with steak Diane and brown-buttered corn with basil. Here the asparagus is steamed and then shocked in ice water before tossing with the vinaigrette. I usually boil my asparagus, but steaming worked very well. The recipe calls for a hard boiled egg to be passed through a sieve and sprinkled on top. I skipped this step, as my dinner was heavy enough with the steak. If I were serving this with salmon the egg might have worked very well.

The Tarragon was a great addition to this dish. The vinaigrette was simple and added a pleasant tang, while the tarragon has a great affinity for both the asparagus and the mustard in the vinaigrette. I chose to do this recipe early on in the project because I love tarragon, but don’t encounter it all that often. I actually hear about it more as a classic ingredient in French cuisine than I come across it on the plate. I live in Montreal, where every second restaurant is a French bistro, and you might expect it to turn up. That’s not to say that it’s not around, just that it’s under appreciated.

Tarragon is tricky. You can’t just use it willy-nilly, it takes a knowing hand so most restaurants who throw stuff together just avoid it. If you have the time to study it, it is worthwhile.