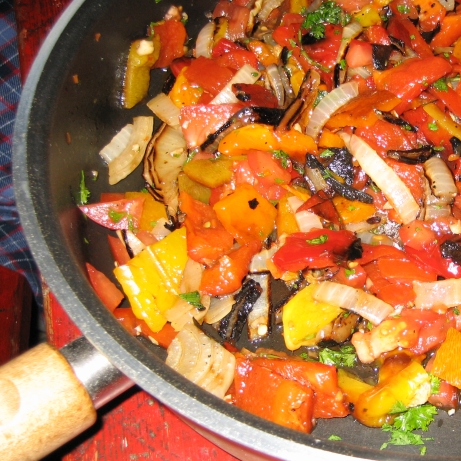 I was a big fan of this easy versatile colourful salsa. I made this one in a rustic cabin on a friend’s island in the Laurentian’s. Grilling is the perfect cooking method up there and these peppers turned out really well. Blackening them on the grill brought out loads of smoky flavours, which worked well with the bite in the rest of the salsa.

My version had all kinds of bite. I’m not a great connoisseur of peppers, and we don’t always have a wide selection in Montreal. I couldn’t find Serrano’s so I went with some nice looking scotch bonnets without really knowing the difference. Turns out the difference is about 250,000 Scoville units. I pitched in about one and a half peppers, and it just about took our heads off. After the fire of the first few bites had passed the peppers made the whole dish glow.

I’m not sure what this would have been like with Serrano’s, but the Scotch Bonnets made it memorable. We tossed the leftovers in with a steak and potato hash the next morning which worked exceptionally well. The recipe doesn’t mention letting this sit before serving, but I think giving this at least an hour to come together would be a good plan. Texturally it was all a bit mushy, something to give it a bit of crunch would have been nice. Maybe leaving the onion’s in slightly larger segments would do the trick. I’d also think about substituting the (useless) parsley with some cilantro.

That looks great! I once went around to a few stores looking for a special cyrano pepper for an Indian recipe, only to realize that all I needed was a lowly serrano. They are my go-to pepper and work well with a lot of flavors.

Absolutely since I made this I’ve been using Serranos more, and I’ve been very pleased with the results.