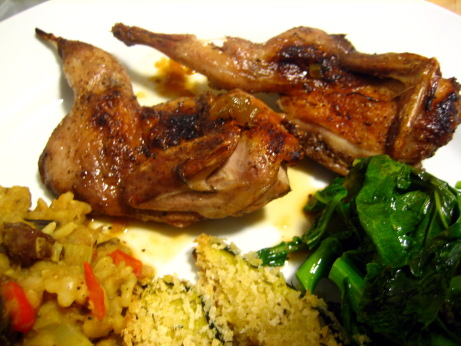 I like to think of quail and lobster as perverse challenges on a Japanese game show. They’re complicated and messy to eat, but you’re challenged to do it in your finery with your peers looking on. I can imagine the quiet golf claps from the spectators as you deftly separate the leg joint, and the derision of the judges and jeers from the peanut gallery as you forget your manners and start gnawing on the wings. There are loads of public forums for messy lobster eating, where plastic bibs rule and squirting lobster juice into your dining companions’ hair is considered to be all part of the fun, but very few community organizations seem to throw an annual quail bash, so I prefer to keep small fowl eating confined to my home.

These quail are supposed to be semiboneless, where your butcher has removed all but the wing bones, and the drumstick. I’m sure that would make the eating a lot neater, but it probably costs an arm and a leg, so we ripped our meat off the bone with our teeth thank-you-very-much. The boned out quail are cut in half, rubbed with salt, pepper, cayenne, and allspice, then chilled for a hour, and cooked under the broiler. The quail are served with a gastrique made with chicken stock, lime juice, molasses, scallions, and butter.

The Good: These quail were just delicious. The spice rub did very nice things for them, quail are fairly flavourful birds, so they were able to stand up to the allspice and cayenne. The quick broiling they received was a really nice way to cook them. Unlike chicken you’ve got to cook them as quickly as possible to get the outside nicely crisped before the meat gets overdone, intense direct heat from the broiler seems to be the ideal solution. They’d probably work well quickly grilled over an intense flame.

The Bad: While there was nothing wrong with the gastrique, I thought it was more or less unnecessary. The quail were a complete package on their own, they weren’t begging for an acidic caramel sauce. I tried some of the gastrique with the quail, and it just covered up some of the bird’s deliciousness. Sometimes I think people make gastriques more because they look nice drizzled decoratively on the plate, or painted on with bold brush strokes than any underlying culinary theory. In this case they didn’t do much for the quail, so I’d skip it. However it might depend on what you’re serving it with, a sweet and acidic sauce like this can go a long way towards tying a meal together.

The Verdict: Make the birds, skip the sauce, eat with close friends and loved ones, don’t worry about making a mess. 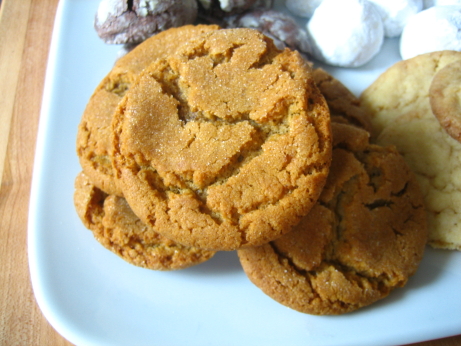 My cookie baking bonanza got a little bit confused. I made ginger cookies that didn’t taste much like ginger, and these spice cookies, which are gingerbread in disguise. I kept mixing them up when I told people which cookies where which, it seemed pretty obvious that the crispy cookies which tasted like ginger should have been the ginger crisps, but no. Whatever they’re called, these were among the best gingerbread cookies I’ve ever had.

I’m reading “A History of Food” by Maguelonne Toussaint-Samat right now, so my head is filled with culinary fast facts. Apparently ginger is a recent addition to what we now call gingerbread. In French gingerbread is still called pain d’Ã©pice, spice bread, and for most of it’s history was made with whatever spices happened to be available, rarely ginger.

The cookies are a little odd in that they’re made with vegetable shortening instead of butter. I expected that to be a big turn-off, but it really worked. The cookies are made by sifting together the dry ingredients, flour, baking soda, cinnamon, ginger, cloves, and salt, then beating together the shortening and brown sugar, adding an egg and molasses, then gently mixing in the mixture of dry ingredients. The dough then goes into the fridge to chill for an hour, and is rolled into tablespoon balls. The balls are dipped in sugar, and baked sugar side up.

I was really happy with the way these cookies came out, they had a lovely colour, and sparkling sugar topping was very attractive. I liked the way the sugar caused the tops to crack and craze. The shortening really contributed to the texture of the cookies, they were crisp outside, soft inside, and appealingly rich. An acquaintance tried these at a party and said “they’re greasy, I like that”, I can’t think of a better way to put it. Usually greasiness isn’t something I look for in a cookie, but here it really worked. The spice mixture was right on, not overpowering by any means, but delicate and balanced.

These cookies are an absolute keeper. Just looking at the recipe I probably wouldn’t have made these if I wasn’t doing this project, but I’m certainly glad I did. 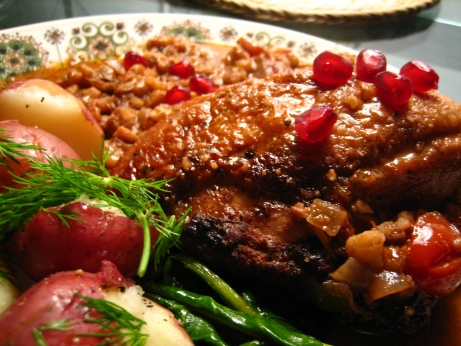 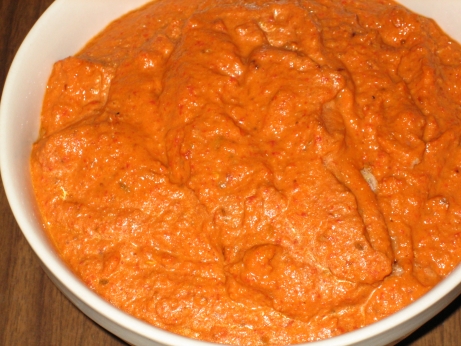