As the title suggests these were extremely minimalist fajitas. Just grilled steak seasoned with lime juice and pepper. They are then served with grilled onions tossed with balsamic, and wrapped in tortillas with a a bit of fresh cilantro, salsa, and lime. I grilled some bell peppers along with the onions. The more Tex-Mex fajitas I’m used to add hot peppers, garlic, and cumin to the marinade but I didn’t miss it all. These were really clean tasting fajitas, simple and unfussy. The lime came through more than I thought it might given that it’s only a ten minute marinade. Increasing the time in the marinade might have helped to bring it through even more. Tossing the griled onions in balsamic was a nice touch, adding a hint of sweetness.

I tend to go a bit hog-wild with fajitas, adding beans, cheese, lettuce, salsa, sour cream, guacamole, onions, cucumber or whatever else is around. It rapidly becomes a burrito with some steak inside. I definitely appreciated the restraint of this recipe, they identified a few key flavours and let them shine. I would absolutely recommend this one, and look forward to making it again this summer. 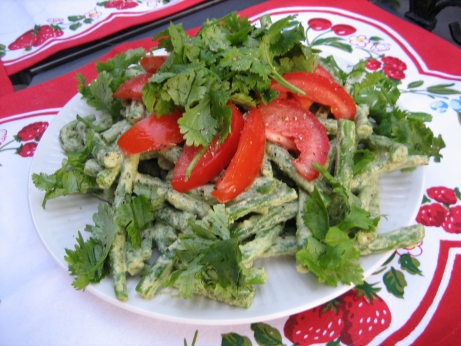 I love cold green bean salads, they’re so quintessentially French countryside. When I’m eating them I can’t help but feel I’m sitting in the back garden of the old farmhouse, outside Lyons, I stayed at one summer as a teenager.

This dish wasn’t particularly French, or entirely what I expected it to be, but that’s all right. I think the word “salad” threw me off a bit here. I was expecting the dressing to turn out like a vinaigrette, but it’s actually more of a pesto; very thick and densely coating the green beans. The ingredients in the dressing are straight out of the classic vinaigrette textbook: oil, lemon juice, salt, garlic, olive oil. But there’s a detour via Mexico with pumpkin seeds, cumin, and cilantro. I found that the flavour was quite good, if a bit heavy on the cumin, but the texture was off. The dressing came out kind of lumpy and goopy. I didn’t think that it worked too well with the beans. There was also far too much dressing for the amount of beans they called for. If I were to make this again I’d toast the pumpkin seeds and scatter them over the beans without putting them through the blender. I’m sure the dressing would come together nicely without them.

The beans were nicely crisp-tender, and the flavour deserves high marks. I also appreciate the Franco-Mexican fusion concept going on here. It’s really the texture that prevents me from giving this the rating it might otherwise have earned.