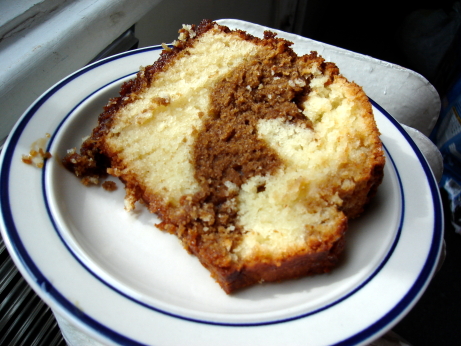 I brought this cake to a brunch at a friend’s last spring. I’m going to have a difficult time giving it a fair rating, because I had horrible seasonal allergies and couldn’t taste anything. I barely remember the brunch, and had to leave after about an hour. My head was so muddled that I’d forgotten my camera, and had to borrow the hosts. He sent me the photos recently, and I’ve been trying to piece this dish back together. The recipe is found in the Breakfast and Brunch section, but it could certainly work for a dinner party.

I should say to anyone reading this that actually attended the brunch, that even though I was feeling awful and sneezing with abandon, I was scrupulous about leaving the room to sneeze, and washing my hands thoroughly before touching your food. I really hate to cook when I’m sick, and definitely worry about contaminating people. I’m not sure how paranoid that actually is though. People who work in restaurants go to work sick all the time, it’s not something we like to think about, but it’s true. If Anthony Bourdain is to be believed they also go to work high, blood splattered, and vomiting, and we’re generally all right. I have a lot of faith in the awesomeness of the human immune system, and the abilities of heat to kill off the nasty stuff that’s gotten into our food. That doesn’t mean I’m willing to take a chance with someone else’s health though.

The recipe followed a fairly standard cake method, mix the dry ingredients, flour, baking powder, baking soda, and salt, in a bowl, then cream butter and sugar in another bowl, add eggs, and vanilla. Then, add the dry ingredients, and sour cream, in alternate batches to the wet ingredients. You then separate 1/3 of the mixture, and add barely dissolved instant espresso to it. You then layer the light and dark batters in a buttered bundt pan and bake for about an hour. Once the cake is unmolded and cooled, you cover it with an espresso glaze made with instant espresso powder, strong brewed coffee (I used a shot of espresso), and confectioners sugar.

I did eat a piece of this cake, but I have no idea what it tasted like. The bitterness of the coffee was the only flavour that managed to cut through the fuzzy sock coating my tongue. Since it’s from The Book, I’m willing to to out on a limb and say that it was probably too sweet. It had a very appealing texture though, moist, with a big fluffly crumb. My dining companion remembers this cake fondly, and it was well received at the brunch. Most of it had disappeared by the time I crawled home to bed. Since people praised it at the time, and brought it up weeks later, it can’t have been bad. The recipe is found in the Breakfast and Brunch section, but it could certainly work for a dinner party. If I didn’t have so many other recipes to get to, I’d make it again, just to find out what it was really like.

I’ll give it an estimated rating of 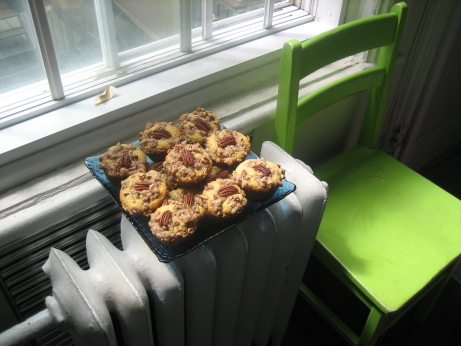 The Book has a deep and abiding affection for streusel-toppings. I suspect that if the cooks at the Gourmet test kitchen leave their batter alone for too long, they’ll find that Ruth Reichl has snuck in and covered it in streusel. I don’t particularly have anything against streusel toppings, they add a nice textural contrast, but they tend to be very sweet. If the underlying baked good didn’t already have 30% more sugar than it needed, that could be a nice addition, but here it struck me as trying to gild the already candied lily.

The recipe starts by blending brown and white sugar with flour, salt, and butter. The streusel topping is made by separating out some of this mixture and working in cinnamon, additional butter, more brown sugar, and chopped pecans. A mixture of sour cream, egg, egg yolk, vanilla, baking soda, and orange zest is incorporated with the remainder of the flour-sugars-butter mixture, then divided up into 18 muffin cups, topped with the streusel, and baked.

There are a lot of things I liked about this recipe, but as is often the case The Book went overboard on the sugar (1 3/4 cups of sugar to 2 1/2 cups of flour). The cakes were rich, dense, and moist, with a soft slightly elastic texture. The orange zest in the cakes was an excellent touch. The topping was double extra sweet, but I really liked the complexity the pecans and molasses in the brown sugar brought to the cakes. I wish that the recipe had less sugar, and more nuts. Keeping the nuts out of the cake batter highlighted them and broke up the uniformity of the muffin. Unfortunately the streusel topping had a habit of falling off. Next time I’d be more careful about pushing the topping down into the batter.

This recipe is found in the Breakfast and Brunch chapter, but these cakes might work better with afternoon coffee, or as a dessert. They were a bit much for breakfast. I brought these over to a pot-luck brunch, to positive reviews, but they didn’t really do it for me. The next day I had one with an unsweetened espresso, and found I liked them much better. The concept and flavours are solid, and the bitter coffee provided some much needed contrast. 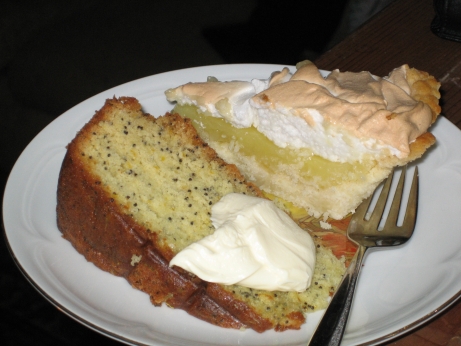 I made this cake for a friend’s birthday party. The best way I can describe it is as a brunchy coffee-cake dressed up for dinner. During the day it works down at the espresso shack as that cute poppy seed loaf in the counter. It’s moist and rich with sour cream, and has a very pleasant fluffy but yielding texture. The cake has 2 tsp of orange zest mixed in, which are understated during the day, but they’ll sparkle at night.

After work the cake turns it up for an evening on the town. Most of the citrus flavour comes from the Grand-Marnier orange juice syrup it slips on. Paired with a flirty dollop of creme-fraiche, and a burst of berries to make the outfit pop it’s ready to go anywhere you’d care to take it.

This cake was simple to put together, it did require making a meringue, and some folding to keep the airy texture I was looking for, but it’s basically a breeze. Once the cake is baked little holes are poked all over and it’s bathed in the Grand Marnier syrup.

Grand Marnier is my favorite digestif, so I’m always happy to have it show up in desserts. The zip of the creme fraice was nice, but it was a touch heavy and coating. Serving this a la mode, or with whipped cream might have worked, or better yet with nothing at all. I had intended to top it with berries, but when I made it good looking berries were not to be found. No great loss as this cake stands up all on it’s own.