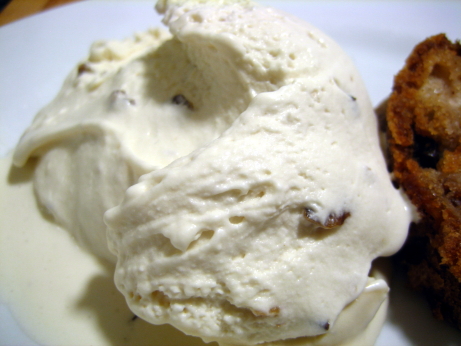 People asked me what I wanted for Christmas this year, and I told them that my heart’s fondest desire was an ice cream maker. Somehow this struck my extended family as hilarious. My dining companion, who had a lot to do with me getting a Kitchenaid mixer the previous Christmas, understood that I wasn’t joking, and got me the ice cream attachment for said mixer. She saved Christmas.

My mother occasionally made us ice cream as kids, but her machine is hand cranked. After the novelty wore off, the prospect of working that handle for twenty minutes every time we wanted a scoop of vanilla turned out to be more than a mother of three wanted to deal with. Her machine has been sitting safely in the cold room for the past fifteen years. By contrast the Kitchenaid attachment is completely painless. The only difficult thing is to remember to put the mixing bowl in the freezer the day before you want to use it. In my dream house with a second freezer the bowl will just live in there. I don’t want to shill for Kitchenaid, but I love my mixer. If our apartment was burning my first priorities would be to get my dining companion and the cat out, then I’d go back for the mixer.

I decided to start my ice cream experimentation with an old favorite, maple walnut. The recipe starts by reducing grade B maple syrup in a pot, then adding heavy cream, milk, and salt and bringing to a boil. Some of that hot syrup mixture is used to temper eggs, then the proto-custard goes back on the heat to thicken. As soon as it’s nappe the mixture is strained and chilled. The custard then goes into the ice cream maker, and when it’s partially frozen chopped toasted walnuts are added. The finished ice cream is still soft so it needs to spend a few hours in the freezer to harden.

This ice cream is incredibly rich, think HÃ¤agen-Dazs with some added fat. The ratio of dairy is 2 cups heavy cream to 1 cup whole milk, and that makes for some very creamy, very fatty, ice cream. Usually I’d fully support more fat in ice cream. I get saturated on ice cream very quickly, so that after about six bites I’m finished. I’m completely OK with making those six bites count by making them as decadent as possible. However, when I’ve got 1 1/2 quarts of it sitting in my freezer this insane richness becomes a problem. I fed most of it to guests, but I still had more than my fair share.

The maple and walnut flavours were really well balanced, I don’t like ice cream with too many chunks, and this recipe got the concentration just about right. The maple flavour permeated nicely, but as one epicurious poster suggested a final swirl of partially incorporated maple syrup would have been a nice touch. I’m lucky enough to live in Quebec, where some massive percentage of the world’s maple syrup supply is produced, so finding grade B syrup was as easy as walking to the local grocery store. Unfortunately those of you not living around here may have trouble getting your hands on it. It really is important to get this darker grade of syrup, as it has much more maple flavour. An imperfect substitution is to reduce the more commonly available grade A syrup to 2/3 of it’s original volume (since this recipe calls for reducing a cup of grade B to 3/4 of a cup, just reduce grade A by half). It should go without saying that fake maple syrup, or as we call it sirop de poo-poo, just won’t do.

As a first go with the ice cream maker I’d declare this a success. The flavour and texture were right, and while the richness became overwhelming quickly, those first few bites were lovely. If I didn’t have 40 different types of ice cream to get through, I’d make this one again. 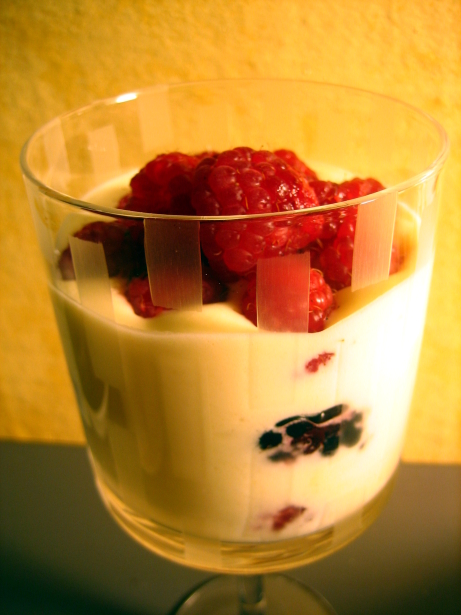 There doesn’t seem to be a recipe online for this one.

My dining companion has gone on a major citrus based dessert kick. If we’re flipping through the book talking about a menu, she’ll inevitably pick a lemon flavoured confection. The only things that can top lemons and limes in her books are rosewater and lavender based sweets. That’s fine by me, I certainly like lemony desserts as well, but I fear The Book will run out of them and it’ll be nothing but raisin puddings until 2016.

This was a really nice, and simple custard, lightened with whipped cream. It starts with eggs beaten with sugar, then dry white wine and lemon juice are added, and the custard is slowly thickened. once it coats a spoon it comes off the heat, gets an addition of lemon zest, and is allowed to chill in the fridge. Meanwhile you beat cream, and fold it into the chilled custard. The custard is layered with berries in a wine glass, and allowed to chill for an hour before serving.

I was really happy with the way this dish turned out. I don’t have a heck of a lot of experience with making custards, and I think I overheated mine a bit. I had trouble taking an accurate temperature, and a burned my finger trying to decide if it was nappe yet, but otherwise things went smoothly. The wine was the killer addition to this crÃ¨me, it had its sweet, rich, and creamy, bases covered but the wine gave it some complexity and body. You can really taste the wine here, so I’d pick something decent, and very dry. The custard ended up being a touch too sweet for my taste, but overall it was very good. Berries for dessert are always such a treat, and they’re even better when the come with an elegant custard. Whipped desserts like this are a great way to end a heavy meal, or to serve on a hot summer night. It tastes rich and satisfying, but it’s not actually that filling.

The recipe made five portions, and we each had one the night we made them. Although we both liked them, neither of us when back for the leftovers, and we eventually threw them away. Sometimes that will happen to me with very intense desserts, that are wonderful, but after a few bites I’m just done for the next couple of months. In this case, the dessert was light and airy, so I’m not sure why I didn’t want it more. Although, I suspect that if I’d served this on a sticky night in July with burstingly ripe berries it would have been a lot more craveable. 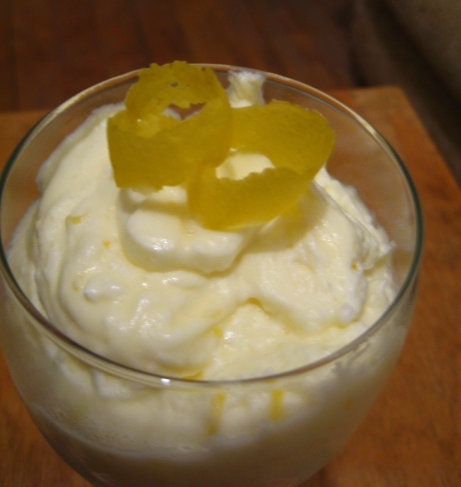 Unfortunately there’s no recipe for this available online.

This is the inaugural post for the Puddings, Custards, Mousses, and SoufflÃ©s chapter of the book. Part of my plan for this summer was to get around to working on this chapter, as well as the Frozen Desserts section. This recipe is the sum total of those efforts. It was very good, but there are still 75 recipes to go in those chapters, and I’ll have to do more than one per year if I’m ever going to finish this project.

The recipe starts by cooking lemon zest and juice together with egg yolks and sugar. Once the sugar is melted and the yolks tempered the mixture is taken off the heat and allowed to cool. The whites from the eggs are then beaten to stiff glossy peaks with cream of tartar and sugar. The meringue and cream, which has been stiffly beaten with confectioners sugar, are folded into the custard. The resulting mixture is then divided among parfait glasses. If you’re like me and don’t have parfait glasses, wine glasses make a perfectly elegant alternative. The glasses then go into the freezer for a couple of hours. Just before serving they’re topped with a bit of lemon zest.

I was very happy with this dish. I don’t eat a lot of frozen desserts, or desserts in general, but once in a while it’s a nice treat. We had a friend over for a summer barbecue, and it seemed like a nice occasion for a cooling dessert. The flavour was all clean clear lemon, it was bright and assertive with just enough sweetness to balance the acidity. I’m quite sensitive to over-sweet lemon dishes, and this one kept on the right side of the balance. The texture was the absolute highlight of this dessert though. Beating the egg whites and cream to very stiff peaks, and careful folding, allowed the dish to stay light and fluffy, but frozen. My dining companion described it as lemon scented air. It looked nice and substantial on the spoon, but melted quickly on the tongue, and practically disappeared before you swallowed. I loved that it left me with the a sense of cooling lemon freshness, without overwhelming me.

In general I like about three bites of ice cream for dessert, this dish whipped in so much air that those three bites managed to fill a whole glass. It was a lovely approach to dessert, focusing on flavour and texture over richness and substance. What a great kick off to this most vexing of chapters. 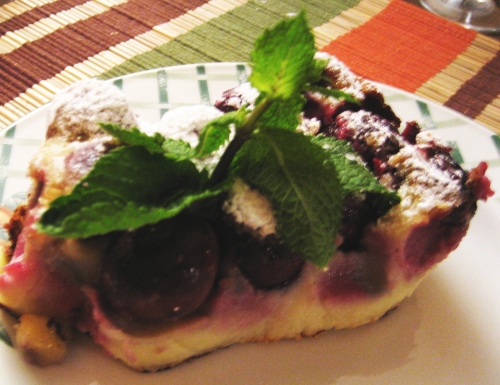