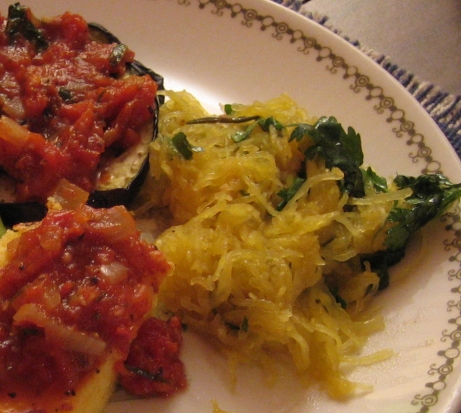 This recipe was extremely simple, and as far I’ve seen is the only recipe in The Book that calls for the use of a microwave. Basically a spaghetti squash is microwaved, the strands are pulled out and tossed with a compound butter made with garlic, cumin, coriander, cayenne, and salt. Top with a bit of fresh cilantro and you have a simple side. This dish tasted good because spaghetti squash taste good, but I’m not sure the compound butter was the best possible pairing for it. The title of the recipe is a bit of a misnomer, there’s nothing all that Moroccan about the spices, in fact they read like basic Tex-Mex cookery. I suppose it’s the coriander that’s supposed to recall North Africa?

The dish probably would have been better if it had gone more Tex-Mex. A splash of lime juice would have added some welcome acidity, and replacing the cayenne with chopped fresh jalapenos would have added more dimension than the straightforward heat of cayenne. The ground coriander was the least appealing part of the butter, it was only 1/2 teaspoon, but a little coriander goes a long way. I found it a bit distracting, and out of balance with the other flavours. The recipe could also have cut back on the butter without anyone missing it.

All of those issues are easily fixed, and the basic method of preparing the squash is great. All I did was poke the squash with a fork, then microwave on high for ~7 minutes per side. The instructions in The Book are for an 800 watt microwave, and I think mine is 1100, so it cooked a bit faster. The quicker cooking didn’t seem to have damaged anything, and you’ll know when it’s done when the squash gets soft, so the exact time doesn’t really matter. A little bit of juice flows from the holes you pricked, and the sugars quickly caramelize making the outside quite sticky. I didn’t put the squash on a plate, and the microwave try was a bother to clean.

The strands of squash come out nicely separated, and whole. They have a great texture, and they’re inherently fun to eat. My squash was sweet, deeply flavoured, and vibrantly yellow. I don’t think I’d toss it with this particular butter again, but from now on my spaghetti squash are going in the microwave. 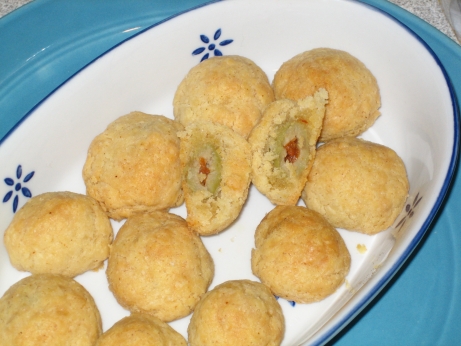 I should have planned an old-timey supper from The Book instead of doing them all separately. There are some great retro recipes in here, and as some of you may have guessed I’m a sucker for dishes that recall church suppers of a bygone era. Here pimento stuffed olives are wrapped in a buttery extra old cheddar dough, and baked. I love imagining the genesis of this cocktail party nibbler. Did someone think that olives weren’t rich and salty enough on their own? Maybe someone ran out of cocktail weenies and made olives in a blanket instead? Maybe a guest spilled the dregs of her martini into the cheese biscuit dough? or perhaps it was part of a wrapping perfectly good foods in dough craze that swept the nation? The world may never know.

The dough was absolutely delicious, it came together easily, and didn’t require any special shopping. All it requires is good sharp cheddar, flour, butter, and the secret ingredient: cayenne. The cayenne sets the richness of the cheese off, and makes the whole crust sparkle. The dough bakes up perfectly, it gets wonderfully crisp on the outside, and the inside is rich and chewy.

My only issue with the dish was the pimentos. I can’t say I love them. I’m a big fan of olives, but I tend to stick to black ones (Kalamata, nicoise, or the Moroccan salt-cured wrinkly ones). Pitted and stuffed cocktail olives have never held much appeal for me. Neither do the sliced olives you find in low end of the spectrum pizza joints and hot-dog stands. I don’t know if it’s the nature of pimentos I don’t like, or a quality issue. Canned and jarred pitted olives tend to be of pretty pathetic quality and flavour compared to whole olives from the olive bar. I don’t know of anyone who produces high end pimento stuffed olives, but with the cocktail renaissance we’re living though someone must have tried to reinvent the martini olive. In any case, I used pretty run-of-the-mill olives, and they tasted pretty run-of-the-mill when I bit into them.

If you’re the sort of person who will happily pick away at a bowl of pimento stuffed olives, then they will be vastly improved by baking them in this cheesy dough. I can think of half a dozen other things I would have preferred to swaddle in this heavenly cheese dough though. 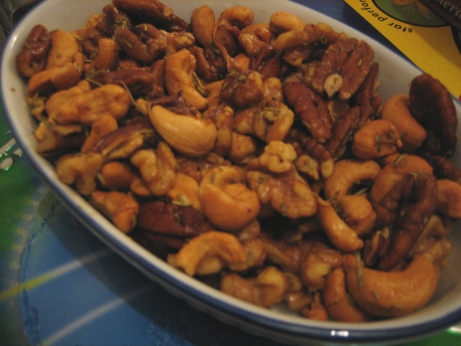 No recipe this time, sorry.

This is the second recipe in the book, with only Candied Walnuts coming before it. It’s a very strong start. It combines my favorite things, simple, delicious, and affordable. It’s a shame that the recipe isn’t available online, but the proportions aren’t that important anyway. All you need to do is melt butter with crushed dried rosemary, salt, and cayenne. Then toss the nuts in the butter and bake the whole thing at 350 for ten minutes.

Those of you who’ve been paying attention will have noticed that the above photo has been contaminated with non-walnut nuts. My excuse? The grocery store was out of walnuts an hour before my guests arrived, so I went with what they had. In combination with the walnuts I had in the freezer I figured it would count. As a matter of fact the walnuts weren’t event the best part. I found that the cashews and pecans really sparkled with this treatment.

The star of the show in this dish is the cayenne, it’s unexpected, and it plays a beautiful counterpoint to the richness of the nuts. But wait! clearly the rosemary is the star. It gives the dish body, and takes the flavours to a more sophisticated place. Without the rosemary the dish would risk being brushed off as “spicy nuts”. Maybe neither star is enough to carry the show, but together they light up the stage like Sonny and Cher.

My only tiny change would be to reduce the butter by about half. Ideally there would be just enough to coat the spices onto the nuts without pooling and carrying flavours away.

These were are really excellent appetizer, and no one could help themselves from having just one more. If you find yourself in the kitchen singing “I’ve got you babe” to a dish of these, I won’t blame you.