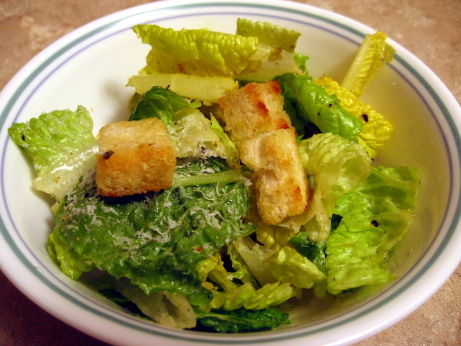 I can’t find the recipe online.

Caesar salad is pretty much always good. The only way to really truly mess it up is to use wilted, or flavorless lettuce. I’ve seen it done, I had a chicken Caesar at a Boston Pizza that was an insult to the whole concept of food, but generally they’re a safe bet, with a chance of being tasty. Growing up my dad made Caesar dressing regularly for a few years, then stopped despite our protests. He’ll make it very occasionally now, but I can’t get a straight answer as to why the Caesar train dried up. His Caesar was excellent, but my mother in law’s is among the best I’ve ever had, and she’s always happy to make one. She just sent me the recipe today, and we’ll be trying it out. I’ll let you know how mine works out in the comments. The Book’s recipe doesn’t hold a candle to either of those versions.

The recipe starts with making croÃ»tons from firm white sandwich bread, toasting them for 10 minutes at 350, then tossing them with a mashed garlic, olive oil, and salt, then toasting for a few minutes more. The dressing is olive oil, egg yolks, lemon juice, white wine vinegar, Worcestershire sauce, salt, and minced and mashed anchovy. You toss romaine with the dressing, grate Parmigiano-Reggiano on top, and add the croÃ»tons, along with salt and pepper, then toss again and serve.

The Good: The croÃ»tons were very tasty indeed. 5 slices of bread worth of croÃ»tons were tossed with 4 tablespoons of garlic oil, so each and every croÃ»ton got a good soaking of delicious delicious oil. I used nice crisp romaine hearts, and good cheese so we were well on our way to a very nice salad.

The Bad: The dressing for this salad was lackluster, in fact I probably wouldn’t have guessed that it was supposed to be a Caesar dressing. It was nearer to a vinaigrette tossed with a bunch of cheese. I think it’s a problem of technique, the recipe asks you to whisk together the oil, egg yolks, acids, and flavourings in a small bowl, in no specific order.Â  Those ingredients are otherwise known as mayonnaise if you whisk vigorously and add the oil to the other stuff in a very slow stream. As written the dressing was thin, but a better emulsion would have given the salad that creamy coating texture that makes Caesar great. The proportions were generally good, but there was too much Worcestershire for my taste, I’d cut the given 1 teaspoon down to 1/2 teaspoon, or even just a few dashes. The other weird aspect of the recipe is that all the garlic is in the croÃ»tons, and none in the dressing. The traditional table-side Caesar preparation in a restaurant has the waiter rubbing the bowl with a garlic clove, that then gets mashed into the dressing. I decided to do something of the same thing and tossed my croÃ»tons with their garlic oil in the bowl I eventually used for the salad. I think leaving all the garlic on the croÃ»tons would have been a mistake. Finally, despite vigorous mincing of the anchovies, there were still a few clumps of salty fish in the final dressing. Not a problem for my sister or me, but my dining companion was not pleased.

The Verdict: I wasn’t optimistic about this salad as I was making it. It didn’t really look right, and tasting the dressing on it’s own I was overpowered by the Worcestershire. Once it was all together it was actually a pretty good salad, just not what I’d ordinarily think of as a Caesar. The lack of texture in the dressing just weirded me out, although all of the basic flavours were there. That said, I went back for seconds of this kinda-sorta-Caesar salad, and my sister who took the rest of lunch the next day said it had improved with age (here’s for hearty romaine that still fine 16 hours after being dressed). Almost all Caesars are good Caesars, and this one tasted just fine, but it was far from the best of my life. 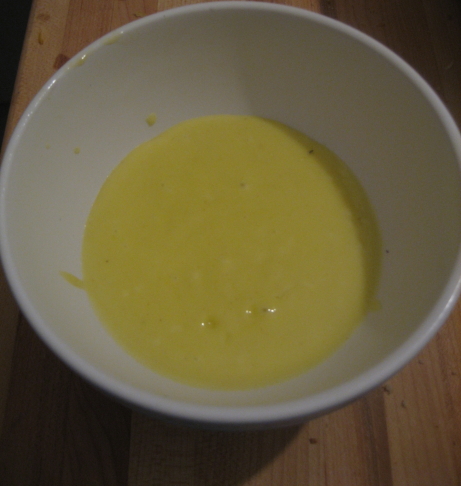 Surprisingly there’s no recipe on Epicurious for plain old mayonnaise.

This is The Book’s basic mayonnaise recipe, there are 7 other dressed up mayonnaises which use this recipe as a starting point, so I’ll be making it a bunch of times. As with most of the basic recipes in the book, it’s solid, but not exciting. However, that’s not a bad thing. I made the mayo recipe from the ’76 edition of The Joy of Cooking, and it was a disaster. Joy is often considered the home cook’s go to source for no-fail basic recipes, and you’d think they’d have a rock solid mayo method, but no. Mayonnaise is made by whisking an egg yolk with oil a drop at a time to get an emulsion started, then pouring in a staggering amount of oil in a slow stream while whisking madly. Once the mayo is thickened and the emulsion is no longer at risk of breaking, you can add extra flavourings. The crazy Joy method would have you add mustard, salt, cayenne, lemon juice, and confectioners sugar before you start the emulsion at all. The mustard is a common addition because it helps the emulsion form, but adding the lemon juice is just stupidity. The acid fights the emulsion you’re working so hard to build, why would you put it in there? I whisked for about 20 minutes before I could get a thin soupy consistency. It was an OK salad dressing, but a horrific mayo. The Book’s method is much more logical, and worked very well.

In this recipe an egg yolk is whisked together with Dijon and salt, then 3/4 of a cup of oil are added first by drops then in a slow stream. Once the mixture starts to thicken to the point that it’s getting difficult to whisk, and the emulsion is solid, you add a bit of white wine vinegar, and lemon juice. Then the remainder of the oil is added in a stream, and salt and white pepper are stirred in.

The mayo wasn’t quite as thick as I would have liked. You’d be better applying this with a spoon than a knife. But, it was silky smooth, and nicely glossy. I might have cut 1/2 a teaspoon of liquid somewhere to keep the mayo thicker. The flavour was pretty good, it had the eggy richness I look for in a mayonnaise, with a little bite from the vinegar and lemon juice, and a background body from the mustard. It was very nice spread on a sandwich, and quite a bit better than the the stuff that comes from a jar.

My only real complaint was the instruction to use either olive oil or vegetable oil in the recipe without further specification. Depending on your olive oil it can have a very pronounced taste, which is great for some applications, but it can make for a very weirdly flavoured mayonnaise. I made mayo at my brother’s place a few weeks back, and the only oil he had was olive, that mayo was edible, but none of us liked it much. It lacked theÂ  mellow feeling I’m looking for in mayo, all of those grassy spicy flavours I enjoy in good olive oil where just unpleasant and distracting when they were so amplified. If you’re going to use all olive oil, I’d recommend using very mildly flavoured oil, preferably not extra virgin. I think the best tactic is to use a small amount of good olive oil for flavour, and then use a flavourless oil for the rest of it (canola, or grapeseed would be my first choices, using about 1 part olive oil to 3 parts other oil).

Mayonnaise is quite easy to make, and homemade has a definite edge over the store bought kind. I’ve always been disturbed by the fact that Hellman’s is made with real eggs, but keeps for months. Without all of the shelf-stable preservatives this mayo will only keep for two days. Since it’s really not much trouble to make, and it tastes better than the miracles of food science on the grocery shelf, I’ve been getting into the habit of making my own. This recipe uses a solid method, and it’s a jumping off point for a lot of interesting variations. It won’t blow your mind, and I’ve had better homemade mayo, but it’s worth trying at least once. 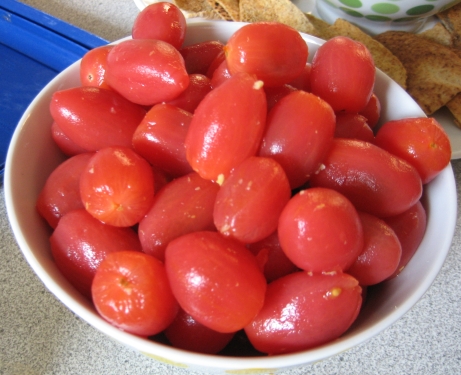 This looked like a really simple recipe. Just cherry tomatoes in a vodka based marinade. The blurb in The Book tells us that “what makes these tomatoes special is that they’re peeled. Don’t worry; after you blanch them their skins slip right off”. The book lies! I blanched them well, even a few seconds longer than recommended in loads of boiling water. The skins absolutely didn’t slip off, and peeling the slightly loosened skins was a huge huge pain. The active time for this was more like 2 hours than 45 minutes. I’ll presume that I just don’t know how to peel a tomato though.

The marinade was quite good. Vodka and tomatoes are a classic pairing, apparently there are flavour compounds in tomatoes that are only soluble in alcohol, and without it we’re missing out on part of what the tomato has to give. The zest and vinegar gave the tomatoes a nice citrus bite. It’s becoming a recurring refrain here, but there was too much sugar on these. The recipe calls for a tablespoon to be added, and while I see where they were going with the sweet / citrus / vodka contrast I think they went too far. Vodka is quite sweet on its own, I’d say a teaspoon of sugar would have been more than sufficient. Maybe they calculated that amount using less naturally sweet cherry tomatoes? Who can say.

While peeling these little guys was a big hassle, it really did let the marinade penetrate the tomatoes. The tomatoes were flavour packed, and because they were peeled but not cooked you still got the delightful feeling of them popping in your mouth. I think they were tasty, but on the whole not worth the effort.